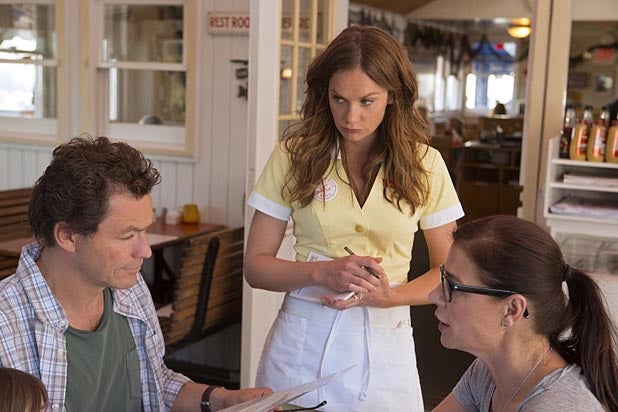 “The Affair” begins in hindsight, after things have gone terribly wrong.

We just don’t know how.

That layer of mystery saves Showtime’s new infidelity drama from the clichéd middle-aged hookup at its core. In this he said-she said retelling, the truth can be elusive, and the emotions overheated.

But at least it’s not rote, and for now that’s enough to tip the scales slightly in its favor.

See video: ‘The Affair’s’ Dominic West and Ruth Wilson Give Into Temptation in New Teaser

For reasons not clear on the first episode, streaming in advance of the show’s pay cable debut after “Homeland” next Sunday, police are interviewing Noah (Dominic West) and Alison (Ruth Wilson) about the liaison after the fact.

First we get Noah’s side. His version is full of ominous near disasters, as if to underscore how fragile his home life was leading up to his fateful meeting with the wounded Long Island waitress. Seemingly happy but restless, he’s a teacher with literary ambitions, a brood of kids that interrupt intimate moments with wife Helen (Maura Tierney) and a wealthy father-in-law that likes to cut him down. From the moment he sees Alison, he is irresistibly drawn to her.

How ripe is he for a fall? “Everything I promised myself I’d achieve as a young man, I’d done it,” he tells the police officer quizzing him about the affair.

Naturally, he paints Alison as being flirty and suggestive, where she describes him as the aggressor in her flashbacks. In both tellings, Noah has a strange fascination with outdoor showers.

Alison is clearly a mess, grieving for her dead child. The death has put a strain on her marriage with surfer Cole (Joshua Jackson), whose family has a ranch in the area.

Of the two adulterers, Wilson’s Alison is the most enigmatic; she’s given to so many tears you don’t believe her when she says she likes the angry surf because that’s how she feels. West manages some nice shadings in his interactions with his dreaded father-in-law and kids, but otherwise comes off as a rationalizing cad.

Of the cheated upon, Tierney is warm but doesn’t have as much to do, while Jackson suggests menace or frustration, depending on whose version of the truth we’re seeing.

Creators Sarah Treem and Hagai Levi, who previously teamed together on HBO’s multi-layered “In Treatment,” infuse plenty of sex into the first episode, under the guise of showing the state of both couple’s marriages. No doubt there will be plenty more sex scenes between Noah and Alison as they succumb to their mutual attraction.

The “Rashomon”-style storytelling elevates the series from being just another conventional story about a middle-aged affair. But, that can’t completely make up for overwrought moments in the opening episode. There are several near misses with Noah’s children that amp up the dread in horror movie fashion. One childish prank early on seems especially dubious.

And there are other false notes: Helen’s father makes a questionable crack about beer in an apparent attempt to paint him as a racist and a snob.

But the biggest problem for “The Affair” is that neither Noah nor Alison is particularly appealing. If they were more compelling, it would make tracking the he said/she said elements more of a pleasure than a puzzle.

There’s enough mystery about what happens between the two to warrant viewing another installment of this drama. But unless things improve markedly, this is one affair I don’t want to spend too much time pursuing.

“The Affair” is available to watch for free online now. It officially premieres on Sunday at 10 p.m. ET on Showtime.

Diane Garrett, formerly senior editor of TheWrap, has written for the L.A. Times, Variety and Movieline in addition to TheWrap and once served as a fact checker for TV Guide. She began reviewing for an alt-teen monthly shortly after moving to L.A. Nowadays, she's never far from digital devices.
KEEP READING..