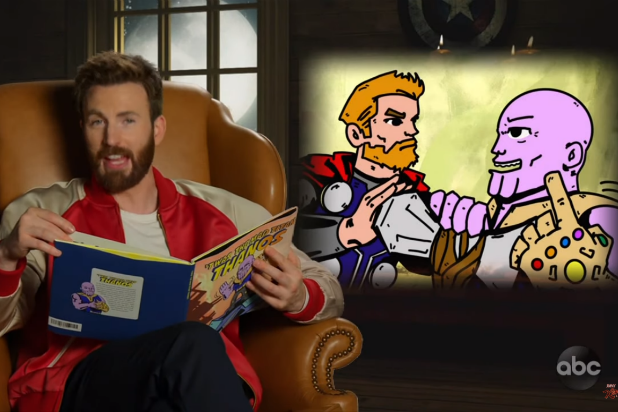 On Monday’s episode of “Jimmy Kimmel Live,” Kimmel rolled out a fun video in which some actual Avengers — Mark Ruffalo, Scarlett Johansson, Chris Hemsworth, Don Cheadle, Jeremy Renner, and Chris Evans — read from a fake children’s book called “T’was the Mad Titan Thanos” that retold the events of “Infinity War” in the style of “T’was the Night Before Christmas.”

“T’was the mad Titan Thanos, who traveled through space. With a big creepy smile on his weird purple face,” the story begins. It continues along those lines, recounting all of the big moments from “Infinity War,” from Thanos’ collection of the Infinity Stones, to the battle in Wakanda, to Thanos destroying half of all life by snapping his fingers, AKA “the Snapture.”

It’s a cute gag, made even funnier by the fact that everyone, except for Chris Hemsworth, blames Thor for letting Thanos win (because Thor didn’t aim for Thanos’ head in the film’s final moments). Naturally, “Thor” actor Chris Hemsworth sharply disagreed, blaming Starlord, from “Guardians of the Galaxy.” But pretty much all the other Avengers firmly blamed the god of thunder.

It’s not, say, undoing the death of poor Spider-Man, but if you’re like us and re-watching the entire Marvel Cinematic Universe in preparation for “Avengers: Endgame,” it makes Thanos murdering half the universe sting a little less.

Anyway, you should watch the whole thing, especially if you like seeing Mark Ruffalo say “f— Thor,” several times.