The pliant 8-year-old at the center of the new horror movie “The Boy” is the very picture of British gentility. Not quite four feet tall and as lanky as can be, he stares out at the world with a vaguely expectant look from under doe-like lashes and neatly trimmed bangs.

Typically garbed in slacks and tie, he’s the opposite of his namesake, the temperamental composer Brahms. Though rosy-cheeked, it’s hard not to feel a chill down your spine when you look at his unmoving face, pale and hard as an elephant tusk.

Brahms is, in short, a doll, and poor Greta (Lauren Cohan) is the only nanny candidate desperate enough to take on the job of “caring” for him. An American hiding from her abusive ex in the English countryside, Greta is left alone to take care of Brahms while his elderly “parents” (Jim Norton and Diana Hardcastle) take a long-needed break from their son.

The pained “sorry” that Brahms’ mother whispers in the new nanny’s ear just before the couple drives off from their Downton-esque manor suggests — if Brahms wasn’t clue enough — that Greta’s time sitting around with a doll won’t be easy.

“The Boy” didn’t screen for critics, but it’s actually a pretty sturdy genre effort. Nearly free of gore, the film taps into the deep and always welcome vein of the opulently bizarre things that rich, emotionally stunted people get into when they’ve got too much money. Stacey Menear’s script is careful and clever about revealing what Brahms really is, for he’s certainly got a mind and will of his own.

Each new parcel of backstory about Brahms that the flirty grocer (Rupert Evans) provides Greta changes our understanding of and sympathies toward the lad, who’s much more sexually jealous of his new nanny than an elementary-school boy (or doll) should be. 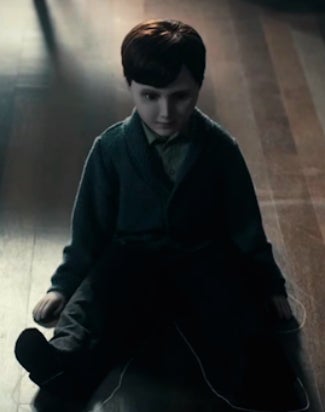 Director William Brent Bell (“The Devil Inside,” “Stay Alive”) keeps the jump scares to a minimum, mining instead the creepiness of the mundane, like the slow slither of Greta’s gold-chain necklace off a sink, pulled by an unseen presence. It’s just as effective as punching through our eardrums with loud crashes, and Bear McCreary’s strings-heavy soundtrack offers great variations on the spooky lullaby.

When Greta’s ex (Ben Robson) shows up later to drag her back to Montana against her and Brahms’ wishes, “The Boy” keeps on surprising. A late twist yields a disappointingly conventional run-from-the-killer sequence, but until then, the film thrives on patient, uneasy-making ambiguity, handled well by the above-average cast.

Best of all, though, are the questions “The Boy” asks about Greta’s plight. Can an employee of the household ever feel truly in charge of her ward? How can a former victim know when she’s finally free of an abuser’s hold over her? Can she feel completely safe asking one potentially dangerous man to protect her from another?

The film’s answers aren’t subtle, but they matter tremendously in making Greta’s eventual struggle for survival resonate beyond the lizard-brain instincts of “life is good/murder is bad.” Given January’s other options, you could do a lot worse than play dollhouse with the nanny.