Leave it to Ivo van Hove to put the Devil back in the Salem witch trials. Before Arthur Miller’s “The Crucible” opened on Broadway in 1953, some right-wingers (Mr. and Mrs. Elia Kazan among them) had already criticized the project for making a false comparison between the witch trials and Joe McCarthy’s persecution of suspected Communists.

Those conservatives charged that there were no witches in 17th-century Massachusetts, but there were Communists in 1950s America. Miller countered, saying that his critics were taking a contemporary view of Christianity. Back in 1693, not to believe in the existence of the Devil, hence witches, would have been heresy.

In van Hove’s new revival of “The Crucible,” which opened Thursday at the Walter Kerr Theatre, evil lurks in ways that it’s best for theatergoers to discover on their own and not in this review. What can be written is that van Hove knows how to put on a good old-fashioned fire-and-brimstone spectacle, and he makes us believe it.

More controversial is his decision to update the play’s setting to what appears to be a private girls’ school in the not-so-distant past, as designed by Jan Versweyveld. Gone is almost any trace of puritanical repression as he brings to the fore the lust of adolescent girls, led by Saoirse Ronan‘s headstrong and determined Abigail Williams. She’s naked in her attraction to John Proctor, and the astonishing performance by Ben Whishaw in that role makes her desire entirely understandable. Whishaw delivers a very feral John Proctor, with something of the little-D devil in him.

This “Crucible” doesn’t conjure up the McCarthy episode in American history so much as it does a variety of more current crises, ranging from torture to pedophilia. But at the heart of van Hove’s direction is what the play is all about: how the perverse convergence of politics, greed, religion, and, yes, sex creates mass hysteria.

Miller packs so much into this play. Revealed at the end of “The Crucible” is how the witch trials were really a scam to grab land away from its rightful heirs. 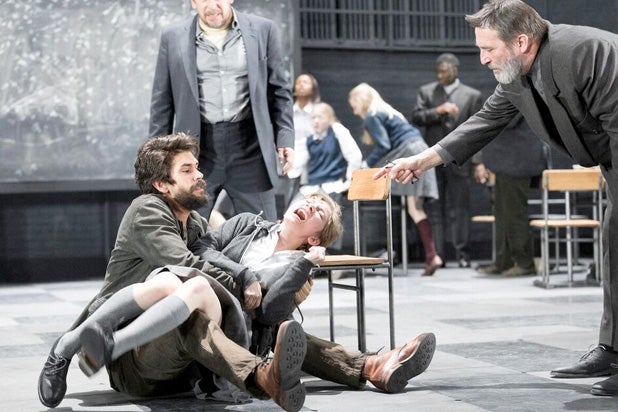 Over the years, van Hove’s challenging, insightful productions at the New York Theatre Workshop have given the city some of its most illuminating nights in the theater. On Broadway this season with “A View From the Bridge” and now “The Crucible,” he shows an even surer hand with his actors. It’s especially fun to watch Ciaran Hinds‘s undoubting Deputy Governor Danforth, who in his low-key menace brings to mind Dick Cheney pontificating on a Sunday-morning TV talk show.

Also notable is Tavi Gevinson as the one girl with a conscience, Mary Warren. Last season, Gevinson made an awkward Broadway debut in the revival of “This Is Our Youth.” She’s more than assured here. She turns against the other girls, calling them frauds. When she once again joins their cabal late in the play, the Devil makes his most convincing appearance.

Theatergoers will remember Sophie Okonedo from her Tony-winning turn in “A Raisin in the Sun” two years ago. As a character, Elizabeth Proctor is nearly as reactive as the Hansberry wife, and the result is that Okonedo basically repeats her long-suffering character from that previous assignment.

If ever there was a moment for van Hove to get eccentric with an actor, this would have been it. In his “A View from the Bridge,” Nicola Walker as Beatrice brought a real proactive edge to just such a role. Okonedo’s Elizabeth is so woebegone from the moment she walks on stage that her and Whishaw’s scene at the end, their bodies covered in the blood and filth of their extended captivity, turns bathetic. Miller always had a tendency to enjoy his good victims’ suffering a little too much.

In one important way, the cutting-edge van Hove is very old-fashioned. Long ago, Broadway plays often featured orchestras that provided underscoring for the drama. There’s no band in the pit at the Walter Kerr Theatre, but van Hove does supply a new score by Philip Glass that envelops the entire drama in an aura of dread and doom.

Van Hove achieved something similar with Tom Gibbons’ all-pervading sound design for “A View from the Bridge.” (Gibbons’ sound design also enhances “The Crucible.”) Here’s betting that Broadway features a lot more music next season, and not just in the musicals.