The first episode of “The Falcon and the Winter Soldier” left us with plenty of questions, but before we get into theories and connections and conspiracies, there’s something pressing we need to address: How in the hell is Bucky Barnes living in any kind of anonymity?

Seriously, how is a low-key existence even possible for Bucky at this point? How does NO ONE recognize the Winter Soldier?

When we first encounter Bucky (Sebastian Stan) in the episode — bless us all, during a government-mandated therapy session — we learn a few key facts. Chief among them is this: Bucky has been granted a full pardon for his crimes. With his newfound freedom — both legally and mentally, as we also learned that Bucky is in full control of his mental faculties once more — he’s now living a quiet life in Brooklyn. And apparently, he isn’t establishing any new relationships. His therapist (Amy Aquino) even notes that Sam Wilson (Anthony Mackie) has made repeated attempts to contact him, which Bucky has just ignored. He doesn’t even have ten contacts in his phone.

To be fair, Bucky does have one friend, an old man called Mr. Nakasima, with whom he has lunch at a restaurant often enough that the bartender (played by Miki Ishikawa) knows them by name. Mr. Nakasima plays matchmaker by convincing her to go on a date with Bucky. (Though if we’re being real, she didn’t need all that much convincing).

Unless this young woman is an excellent actress, she genuinely seems to have no idea who Bucky really is. She asks him about his family and friends, and appears generally confused by his cagey answers. She thinks he’s joking when she asks him how old he is and he tells her the truth — 106 years old. And while it’s not clear what she thinks about his flimsy excuse for the glove the audience knows is covering up his Winter Soldier metal arm — he tells her he has poor circulation, which isn’t the WORST lie a 106-year-old could tell — there’s no indication she suspects he’s a cyborg.

But that’s not all. Bucky also talks about how he tried online dating but didn’t much care for it. And then soon after comes the reveal: Mr. Nakasima is the bereaved father of a young man Bucky murdered years earlier while still brainwashed as the Winter Soldier, and their friendship is apparently related somehow to Bucky’s atonement process.

So to recap, Bucky was able to become friends with an old man whose son he once shot at point-blank range, become a regular at a restaurant, establish a flirtation with a bartender, and even go on a dating app all seemingly without anyone realizing who he is. Again I ask, how? He’s not exactly Joe Everyman — he’s a world-renowned assassin.

Okay, yes, as the Winter Soldier he typically wore a mask that covered the lower half of his face (remember, even Steve didn’t recognize his childhood best friend until the mask came off in “Captain America: The Winter Soldier”). As Natasha explains to Steve in “Winter Soldier,” most intelligence communities didn’t even believe he existed. “So he’s a ghost story” Steve pushes. Bucky was very good at the covert part of his existence.

But then came the events of “Captain America: Civil War.” You know, when the Sokovia Accords were being ratified in Vienna before an explosion set off by Zemo killed Wakanda’s King T’Chaka. In the aftermath Bucky was framed and this picture was splashed across every major news outlet in the world: 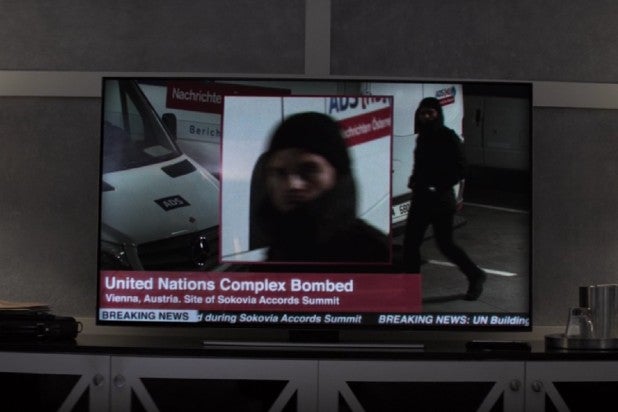 Even with that grainy image, a man running a newsstand in Bucharest (where Bucky was laying low at the time) recognized him almost instantly.

Of course, by the events of “The Falcon and the Winter Soldier,” Bucky has cut off his long hair. But it’s essentially back to the length he had it back during the 1940s, and as we saw in “Captain America: The Winter Solider,” there’s a whole portion of the Captain America exhibit dedicated to Bucky and his pre-Winter Soldier life (and face) at the Smithsonian. Winter Solider or not, Bucky is famous.

And yet, no one seems to bat an eye at him as he walks down the street. He’s not even doing the classic MCU baseball cap disguise . You know the one. This one. 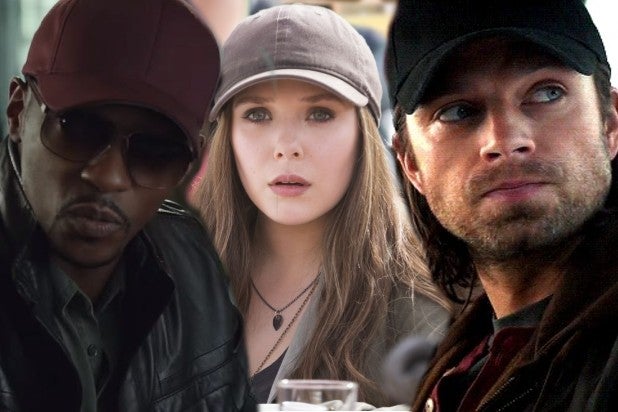 All of that said, it isn’t necessarily impossible for him to fly under the radar, if only because of the timeline of things. Bucky was believed killed during World War II, and subsequently went unidentified as the Winter Solder for decades. His identity as a master assassin was only revealed to the world in 2016. Then, in 2018, he was snapped out of existence along with half the universe and spent 5 years dead. (“The Falcon and the Winter Soldier” is set just a few months after the reverse “blip,” in 2023.)

That’s arguably plenty of time for people to forget what someone looks like. Hell, if you walked past a criminal on the street — even one who had been televised — would you recognize them immediately? Not to mention, he’s been fully pardoned, so it isn’t like there are BOLOs or literal “wanted” posters out for him everywhere.

So yes, there are ways that Bucky can be pulling this off. But even so, an in-universe explanation would be helpful, because it would take a lot of stretching.