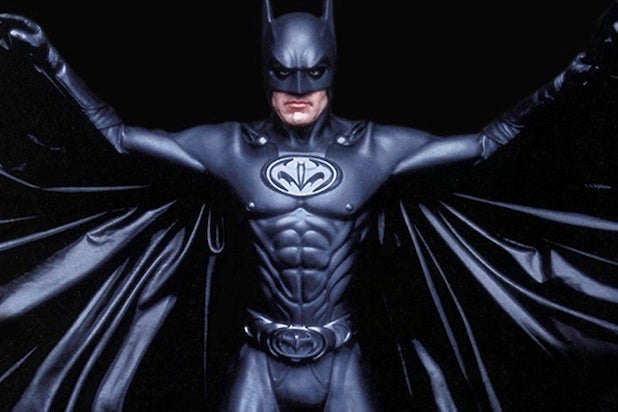 After 79 years, Batman’s penis has finally made its debut in the latest “Batman” comic.

The reveal happens in the first issue of “Batman: Damned,” a limited series from writer Brian Azzarello and artist Lee Bermej. In the scene in question, Batman/Bruce Wayne has returned to the Batcave and begins to pull off his Batsuit. Next come three panels in which a disrobed Bruce is lit from behind, the light clearly and unmistakably accentuating his genitalia.

As of right now, lil’ Wayne can be seen only in the print version of the issue — the digital version has been altered so the Dark Knight’s squire is obscured by shadow. DC Comics hasn’t commented publicly, but Polygon reports that the digital panel was changed because DC editorial doesn’t consider the nudity essential to the story. You can see the censored version right here below:

Also Read: Did DC Comics Just Kill Off Another Robin in 'Batman' Issue 55?

DC did not immediately respond to a request for comment from TheWrap.

As for the uncensored image, it isn’t anatomy-class explicit, just the outline contrasting against shadows, but it’s clear enough that some very specific details are apparent. Look, there’s no other way to put it: Bruce Wayne is probably circumcised.

If you absolutely want to see Batman’s penis, click here for the uncensored version. (Needless to say, it puts the “D” in DC Comics, so it’s very NSFW.)

Now, before you worry that this is the new norm for the Caped Crusader’s comic book adventures, don’t. “Batman: Damned” is a standalone story separate from the mainstream continuity, part of DC’s new Black Label imprint. The mature line of graphic novels features new titles and reprints by heavy-hitter creators like comics legend Frank Miller, and Oscar-winning screenwriter John Ridley.

For those of you who read “Batman” for the articles, in “Batman: Damned” The Joker has apparently been murdered and Batman, experiencing mysterious memory gaps, worries he might be the culprit. Thus Bats teams up with the wizard John Constantine and the ghostly good guy Deadman to find out what happened. It’s available in comic shops and digital platforms now.