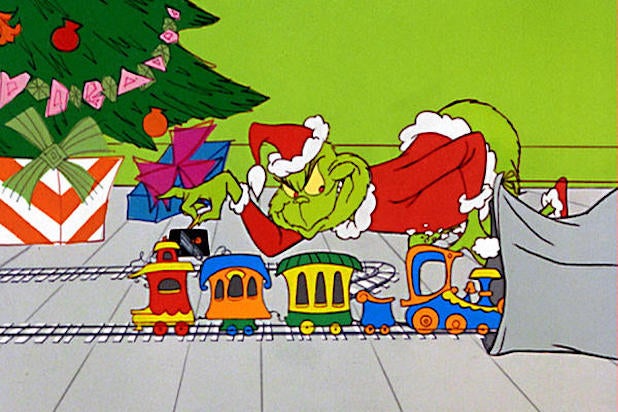 The animated adaptation of Dr. Seuss‘ “How the Grinch Stole Christmas!“ turned 50 years old Sunday, and although it began its “life” on shaky ground, it has hidden its age well.

The holiday classic was thanks to the acclaimed animator Chuck Jones, who gave MGM a little nudge to bring the popular children’s book to life. The first hurdle was talking Dr. Seuss into the idea and then selling corporate sponsors on it. With color presentations boards in hand and meeting after meeting with companies like Nestle and Kellogg’s that seemed compatible the concept, the Foundation for Commercial Banks agreed to fund the expensive project.

With a hefty budget to insure a quality production, the animation team created the 30-minute television special “How the Grinch Stole Christmas!” and CBS paid $315,000 for the right to air it in 1966 and 1967. For the time, that amount was unheard of, prompting Variety to write a story called “The Grinch — It Not Only Stole Xmas But Picked CBS’ Pocket for $315,000.”

The reviews were, well, not so great.

While The New York Times wrote that “the Grinch is a creation that should be left undisturbed on the printed page,” The Los Angeles Times wrote: “As unfashionable as it is to be an old grouch so close to Christmas, I’ll have to risk it and say that the Dr. Seuss debut on CBS-TV Sunday night with his cartoon story of ‘How the Grinch Stole Christmas’ was a disappointment.”

Then again, what do critics know? A half-century later, it is a must-see holiday treat. In fact, we could let the holidays pass without this: