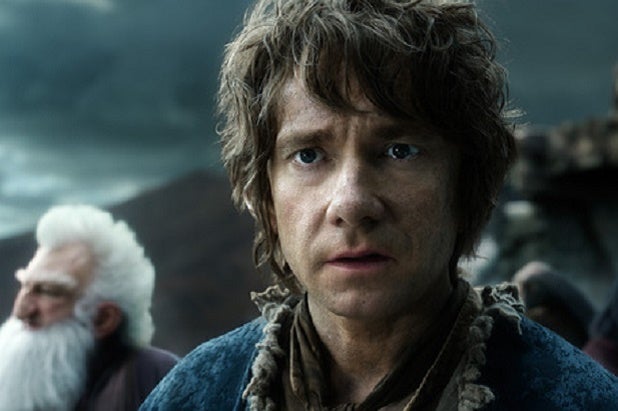 Peter Jackson’s “The Hobbit: Battle of the Five Armies” flexed some Middle Earth muscle with $15.6 million at the box office Friday, and is now positioned to claim its second straight weekend crown.

At the same time, the flag-waving frenzy over “The Interview” cooled down, the overall box office stayed hot and Oscar hopefuls “American Sniper,” “The Imitation Game” and “Selma” picked up steam.

Sony’s controversial Seth Rogen-James Franco comedy took in an estimated $725,000 from 331 independent theaters, down from its $1 million first day, and is looking at $2.8 million for the weekend. Sony made the film at the center of the hacking scandal available for downloads on YouTube, Google Play, Xbox and the studio’s own site this weekend well, which irked the major theaters chains and caused them to boycott its release.

“Five Armies,” the finale in “The Hobbit” franchise from MGM and New Line, should finish the four days with more than $45 million. That should be enough for the blockbuster epic based on J.R. Tolkien’s fantasy to hold off Universal’s “Unbroken” and Disney’s “Into the Woods,” the two wide over-performing wide openers that went 1-2 on Christmas Day, and push its domestic total past $175 million for Warner Bros.

The Angelina Jolie-directed biopic of Louis Zamperini and the star-laden musical directed by Rob Marshall both took in around $12 million Friday and should finish the long holiday weekend in the $40 million range.

Paramount’s “The Gambler,” another wide opener, is on pace for an $11 million weekend after bringing in $2.4 million Friday. The Mark Wahlberg crime drama finished behind holdovers Fox’s “Night at the Museum: Secret of the Tomb,” Sony’s “Annie” and Lionsgate’s long-playing “The Hunger Games: Mockingjay – Part 1.”

The second-week holdovers got holiday bumps and saw increases from their openings last Friday. The “Night at the Museum” sequel took in $7.4 million, up 34 percent from last week, and is heading for a weekend total of around $25 million. “Annie” was up 16 percent and took in $6.1 million Friday, and should finish at around $22 million.

The Tim Burton-directed “Big Eyes” is struggling after taking in just over $1 million from 1,307 theaters on Friday for the Weinstein Company. That the tale of artist Margaret Keane starring Amy Adams and Christoph Waltz will likely finish out of the top ten with a disappointing $4 million for the four days.

All of this adds up to weekend box office that is running about 12 percent ahead of last year, when “The Hobbit: Desolation of Smaug” and “Frozen” lead the way, and will end the month-long slump in ticket sales.

Several movies with awards ambitions were scoring, too.

“American Sniper,” the Iraq war tale directed by Clint Eastwood and starring Bradley Cooper and Sienna Miller, continued to impress in its opening for Warner Bros. It took in nearly $200,000 from just four theaters Friday and is on pace for one of the biggest limited debuts of the year.

Paramount’s civil rights drama “Selma” brought in $211,000 from 19 theaters on Friday. That means the Ava DuVernary-directed drama should wind up north of $600,000 in its first weekend, a very strong start.

The Weinstein Company’s Benedict Cumberbatch drama “The Imitation Game” powered to $2.8 million Friday. It will finish with four days with more than $11 million after connecting solidly in its nationwide expansion from 34 to 747 theaters in its fifth week.

TWC’s Benedict Cumberbatch drama “The Imitation Game” powered to $2.8 million Friday. It will finish with four days with more than $11 million after expanding from 34 to 747 in its fifth week.