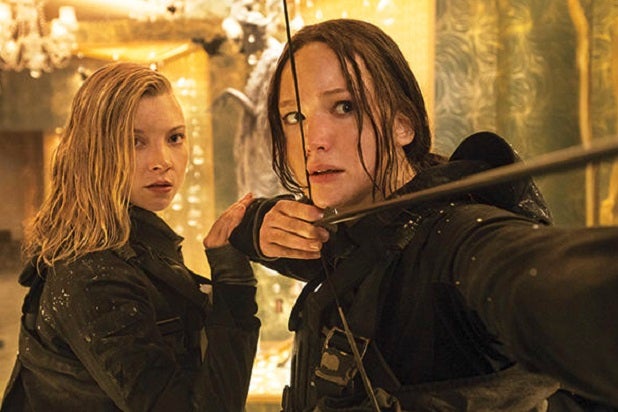 It seemed quite appropriate that “The Hunger Games” was leading the box office on Thanksgiving morning as the aroma of turkey and the fixings began wafting from the nation’s kitchens.

“The Hunger Games: Mockingjay – Part 2” has nothing to do with pilgrims, of course. The final chapter in Lionsgate’s blockbuster young-adult sci-fi film franchise about Katniss Everdeen (Jennifer Lawrence) liberating her country Panem brought in roughly $13.7 million from 4,175 theaters on Wednesday.

That put the reigning box-office champ on pace for more than $70 million over the five-day holiday weekend and gave it the inside track for the top spot ahead of three other movies opening wide on Wednesday.

Disney’s family film “The Good Dinosaur,” from Pixar Animation, was second with almost $10 million on its first day. That translates to more than $60 million over the five days, but estimates are trickier over holidays and the minivan set could push it higher on Saturday and Sunday.

MGM/New Line Cinema’s boxing drama “Creed” rolled out on the 40-year anniversary of “Rocky,” the Sylvester Stallone classic from which it’s spun. Writer-director Ryan Coogler‘s PG-13 saga starring Michael B. Jordan brought in $6 million on its first day, heading for a better-than-expected $40 million over the long holiday.

Fox’s comedy horror reboot “Victor Frankenstein” starring Daniel Radcliffe and James McAvoy is looking like a box office turkey. It scared up just $620,000 on its first day and may not crack $7 million over the extended holiday weekend.

“Mockingjay – Part 2” debuted to a franchise-low $102.7 million last weekend, though it scored the fifth best opening of 2015. But the movie is rebounding well and on its current pace will fall off roughly 30 percent over the five days, in line with the drop of “Mockingjay – Part 1” last year.

The franchise finale crossed the $300 million mark at the worldwide box office Wednesday, and should be over $400 million by the end of the weekend. Its domestic total is around $136 million and its foreign haul is up to $183 million.