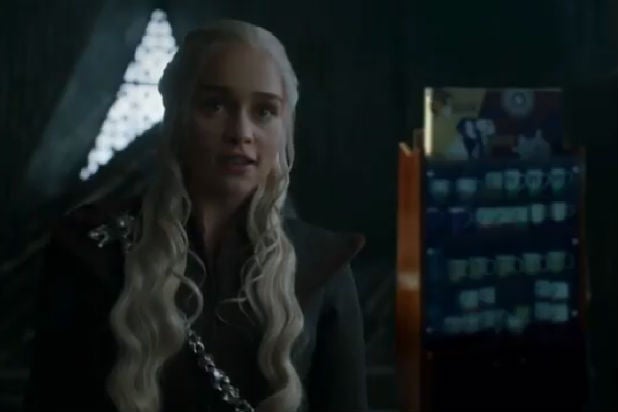 On Monday’s episode of “The Late Show,” Stephen Colbert joined the many people having a little fun at the expense of “Game of Thrones” after viewers noted that somehow, a coffee cup was left next to Daenerys Targaryen in a scene that made it to TV.

In a fun video clip, Colbert imagined what it must have been like for Dany to place that latte order. So it is that the video shows us the Winterfell Starbucks, and the awkwardness when the barista tries to announce that Dany’s order is up.

“Darius Stormbottom of the house taragon, the fur of her gams, cream of the anvils and the thirst hen,” the barista says. “Projector of the seven kitchens, the mother of dreidels, the Parcheesi of the Greek glass knee, the onion, the bleakest of chins.”

In fairness, the Queen’s actual royal style is the extremely complex (and lengthy) “Daenerys Stormborn of House Targaryen, the First of Her Name, Queen of the Andals and the First Men, Protector of the Seven Kingdoms, the Mother of Dragons, the Khaleesi of the Great Grass Sea, the Unburnt, the Breaker of Chains.”

That’s a mouthful (but no one tell her that).

On #LSSC tonight: Don’t talk to Mother of Dragons Daenerys Targaryen until she’s had her coffee. #GoT pic.twitter.com/LCIKwAWz4E