With his first three features – “Blue Valentine,” “The Place Beyond the Pines,” and now “The Light Between Oceans” – there seems to be a definite pattern in the films of writer-director Derek Cianfrance. He offers up fascinating, complex characters who make difficult life choices, often in locales that are captivating or at least unusual. And then he bobbles the third act.

Adapting the novel by M.L. Stedman, Cianfrance spends a good part of “The Light Between Oceans” creating empathy for men and women who are at odds with each other, even the ones who have behaved selfishly and recklessly. It’s a grand, old-school saga full of sacrifice and betrayal and loss, and just when the audience is gearing up for a powerfully tragic resolution of the kind that Thomas Hardy might have written, the movie veers off into Nicholas Sparks territory instead.

See Video: Michael Fassbender, Alicia Vikander Are Newlyweds in First Trailer for 'The Light Between Oceans'

In the early part of the 20th century, Tom (Michael Fassbender) returns to Australia after the Great War, and he just wants to be alone to process the horrors he’s endured; subsequently, the gig of lighthouse keeper seems like a perfect fit. His plans for a solitary life are complicated when he meets Isabel (Alicia Vikander), a young woman who lives in the town across the harbor from the lighthouse; she lost two brothers in the conflict, and has personal wounds of her own. After a brief correspondence, they wed.

All seems well on their far-off little island, until Isabel miscarries her first pregnancy. Tom is supportive and loving, and they try again, but a second miscarriage leaves her shattered. A day or so later, something miraculous happens: a rowboat washes ashore, bearing a dead man and a live, squalling infant. Even though Tom is supposed to meticulously record everything that happens on the island, Isabel prevails upon him to hush up the incident, bury the corpse and claim the baby as their own.

Also Read: Will 'Don't Breathe' Hold Off Newcomers 'Light Between Oceans' and 'Morgan' at the Box Office? 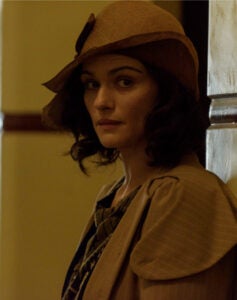 They’re happy with the arrangement, until Tom discovers that Hannah (Rachel Weisz), a woman in town, is distraught over her husband and baby girl who were lost at sea; she married a German, and when he was attacked one night by local bullies, he managed to get himself and the child into a boat to escape. For Tom, there are no easy answers; keeping quiet means feeding Hannah’s desperation, and all for a lie, but speaking up means exposing Isabel to prosecution and depriving her of the toddler (by this point, four years or so have passed) she has raised and adored.

And then the movie collapses, unwilling to see through any of its darker themes or consequences. Until that point, “The Light Between Oceans” is a gorgeous and sad tale, brought to life by three extraordinary performers — with a little help from Australian legends Bryan Brown and Jack Thompson — and always offering something beautiful to behold. The cinematography by Adam Arkapaw (whose credits include Fassbender’s recent “Macbeth” and upcoming “Assassin’s Creed”) captures the exhilaration and the danger of the sea — and, for that matter, of the romance — in a way that David Lean would appreciate, and the art direction and costumes capture the era accurately without embalming the past.

Fassbender provides quiet strength and internal agony, but the film really belongs to his female co-stars: Weisz finds grace notes in a role that’s mostly defined by grief, while Vikander adds another fascinating role to her repertoire, bolstering this woman’s heart and soul to such a powerful extent that we can’t help relating to her even when she becomes, for all intents and purposes, a kidnapper.

If only Cianfrance had fully committed to the difficult questions “The Light Between Oceans” asks but then decides not to answer, this might have been packed a real punch. (I haven’t read the novel, but the responsibility for the movie ultimately lies with the person adapting it. And if the book didn’t have the goods, then don’t turn it into a film.) Emotionally speaking, this film lays the foundation for a mansion, and then decides at the last minute to construct a gazebo instead.