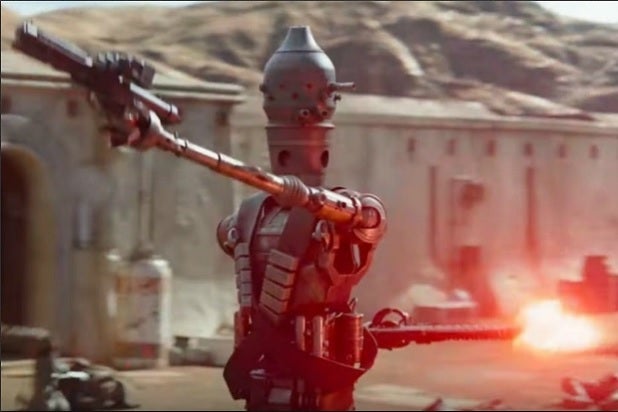 Spoiler alert: This story contains spoilers from the Season 1 finale of “The Mandalorian”

Taika Waititi, who voiced scene-stealing robot IG-11 in “The Mandalorian,” thinks fans should petition to bring back the hunter/nurse droid for the second season of the Disney+ “Star Wars” series.

“I feel we just need to start a petition because I think that character, really, he held up the entire season, didn’t he?” Waititi told TheWrap on Monday. “From episode one all the way through, he was the hero.”

IG-11 appeared in three episodes this season. Waititi directed the season finale “Chapter 8: The Reckoning,” in which IG-11 heroically sacrificed and self-detonated himself to enabled the Mandalorian, Baby Yoda, and Cara Dune to escape from Moff Gideon and his forces.

What’s next for New Zealand filmmaker post-Oscars? A return to the Marvel Cinematic Universe. “I’ve just finished shooting this film, a sports film in Hawaii with Michael Fassbender,” said Waititi. “In August, I start shooting another ‘Thor’ film.”

That film is “Thor: Love and Thunder.” Waititi directed 2017’s “Thor: Ragnarok” which was considered the best in the “Thor” series and made $854 million worldwide box office.