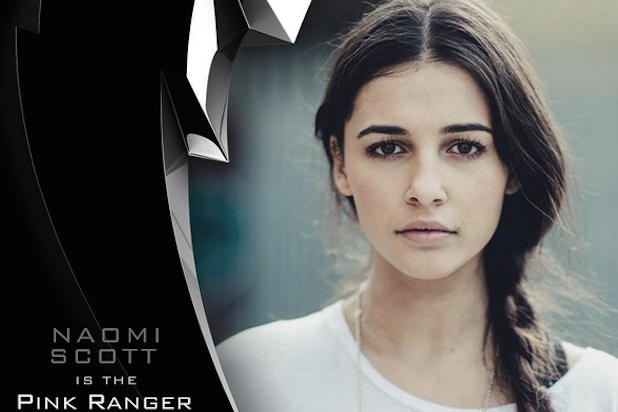 Hot on the heels of her supporting turn in “The Martian,” Naomi Scott has been cast in Lionsgate and Saban Brands’ “Power Rangers” as the pink Power Ranger, it was announced Wednesday on Instagram.

The official “Power Rangers” Instagram account wrote: “It’s official! #NaomiScott will play the #PinkRanger in the @PowerRangerMovie! Coming in 2017…”

Scott starred on Steven Spielberg‘s short-lived sci-fi series “Terra Nova” and will soon be seen in Patricia Riggen’s true-life drama “The 33,” which chronicles the rescue of a group of Chilean miners trapped underground.

Haim Saban is a producer on the new film along with Brian Casentini and Allison Shearmur. With 20-plus years worth of stories to tap into, look for Lionsgate to be push for a “Power Rangers” franchise.

The 2016 film will mark the third theatrical release for the franchise. “Mighty Morphin Power Rangers: The Movie” capitalized on the property’s initial success, starring the original series cast and bringing in more than $66.4 million globally in 1995. It was followed by “Turbo: A Power Rangers Movie,” which served as a launchpad for the “Power Rangers Turbo” television series.

Scott is represented by United Agents and Station 3.

It’s official! #NaomiScott will play the #PinkRanger in the @PowerRangersMovie!  Coming in 2017…