After an auspicious start with small-scale gangster pulp (the “Pusher” trilogy) and stylish portraits of brutal men (“Bronson,” “Valhalla Rising”), Danish filmmaker Nicolas Winding Refn has turned to the world of wispy ingénue models in Los Angeles for his latest, “The Neon Demon.”

His first all-female exploration of humankind’s latent awfulness is no less exquisitely realized or captivatingly violent. It’s also significantly shallower, however, as a pointed commentary on the cutthroat world of fiercely protected beauty and ephemeral hotness.

That doesn’t mean you can’t enjoy the cascade of formal, brazen imagery, the way you would a lush, color-popping magazine spread that might provoke wonderment but mostly staves off boredom. (And can’t totally hide barely veiled disdain.) Just don’t mistake its sporadic painterly power for the clinical rigor of Kubrick, De Palma’s maestro panache, or a snaky Lynchian nightmare.

Following a couple of Ryan Gosling vehicles that seemed to define the spectrum of his talents — gorgeously grimy noir (“Drive”) to masturbatory seediness (“Only God Forgives”) — “The Neon Demon” finds Refn teasing out the limits of his minimal/maximal tendencies. A bobcat in a tawdry motel room? Okay, cool. An inconveniently coughed-up eyeball in a chic, spotless beach house? All right, ugly/pretty in equal measure. Snogging a corpse? Oy.

Refn invites it all, from revulsion to laughter, and depending on your mood, that’s either a good sign or a bad sign. And he likes signs. When innocent runway hopeful Jesse (an aptly decorous Elle Fanning) tells her boyfriend Dean (Karl Glusman of Gaspar Noë’s “Love”) that as a child she used to vocalize her dreams by asking the moon, “Do you see me?” Refn clearly wants us to think about all the evils borne out of one-sided chats with the earth’s eerie nightlight. 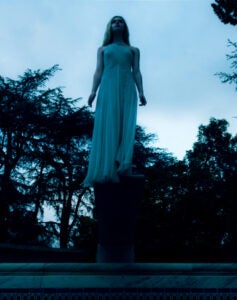 Jesse is a 16-year-old, corn-creamy beauty whom we first see in fake-blood-soaked repose on a divan for a fetish-violent glam photo shoot. New to L.A., she soon meets inquisitive yet friendly makeup artist Ruby (Jena Malone), who takes her clubbing — cue the thick tracking shot through a shadowy, cavernous, thumping nightspot that might as well be a hellmouth. In the bathroom she’s introduced to the competition: a pair of lipsticked blondes (Bella Heathcote and Abbey Lee) whose smiling animosity is coldly funny. (“I hear your parents are dead.”)

But Jesse also takes a meeting with an agent (Christina Hendricks, still very much in Joan-from-“Mad Men” mode) who thinks she has potential, and even tells Jesse to say she’s 19 at auditions. Though our doe-eyed heroine is scraping by in a cheap Pasadena motel operated by a sinister, callous manager (the ever-physical Keanu Reeves), her imminent ascent is validated when she’s tapped for greatness by a demanding star photographer (Desmond Harrington, “Dexter”) and an arrogant designer dripped into being by Alessandro Nivola.

With protectors and antagonists vying to get what they want out of Jesse, the attention ultimately turns her confidence from a feeling that pretty is all she has, to believing that pretty is all she needs. Jesse is allowed to close a big fashion show, which Refn turns into a phantasmagoric narcissism interlude involving an inverted pyramid that may or may not be real, and Jesse in triplicate, kissing herself.

Though the hermetic, surface-obsessed world of “The Neon Demon” had hardly been warm and inviting up to that point, Refn’s glitter-dream sensibility takes an even chillier, more gruesome turn. This will probably please horror aficionados, who will quickly figure out and relish what’s coming, as long as they don’t mind their ick served up like a series of perverse fragrance ads, one of which could double as a plug for a very particular form of indigestion.

You don’t walk away from “The Neon Demon” with any real insight into the corrosive nature of the beauty industry, and the lines in the screenplay by Refn, Mary Laws and Polly Stenham that attempt to do so amount to snarky jabs (“Plastics is just good grooming”) that mostly sit there the way a lot of the talking does. The dialogue gets in the way of Refn’s tableau-minded shot-making, which cinematographer Natasha Braier (“The Rover”) executes with aplomb.

While Refn crafts occasionally crisp and dazzling images, he can’t compare to the work of David Lynch in “Mulholland Drive,” imbuing them with a voluptuous peculiarity that truly unsettles. The polished assuredness under which Refn operates is considerable, and even appealing, and yet there’s always one element in any given scene — a music cue, a banal sound choice, a shot held until it screams “look at me” — that breaks the mood. Rather than playing like a woozy cinematic descent into danger and venality, “The Neon Demon” is a slide show of static horror: you can hear Refn furiously clicking from image to image.

This photo by Deborah Feingold from a 1989 shoot has set reddit aflame with the image-altering Photoshop possibilities. Let's take a lot at a sampling of the madness.