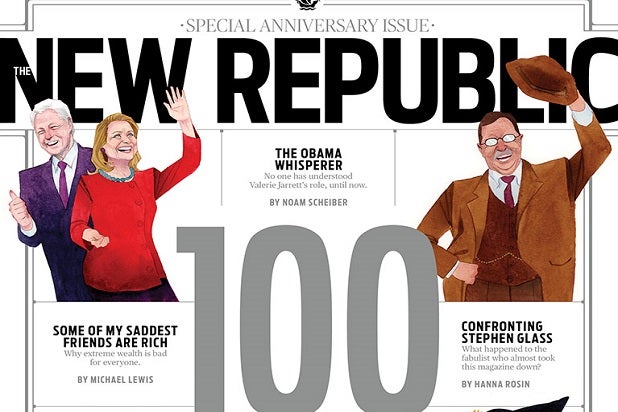 The New Republic’s new editor Gabriel Snyder announced four new hires on Wednesday, marking the political magazine’s first move to replenish its ranks since over a dozen staffers quit in December, which forced a suspension in publication.

“This is the first wave of new hires we’ll be making, including in the DC office, so I’ll have more exciting updates soon on the staffing front in addition to continuing to add to our roster of contributors,” said Snyder in his editor’s letter, which was obtained by TheWrap.

The four new additions are Jamil Smith and Elspeth Reeve, who join as senior editors, Bijan Stephen, an associate editor, and Cathy Park Hong, who was named poetry editor.

Snyder’s letter touted the quartet’s resumes and accomplishments, including Smith’s four year stint as a producer for MSNBC’s “The Rachel Maddow Show,” Reeve’s time at Elle and The Atlantic Wire, Stephen’s work at Vanity Fair and Vice and also Hong, who has apparently published three collections of poems and nabbed a Barnard Women Poets Prize.

As TheWrap previously reported, over 50 full-time employees and contributors, including top editors Franklin Foer and Leon Wieseltier, resigned from the The New Republic over changes to the publication under owner Chris Hughes. Since then several new contributors have been announced, but this marks the first full-time hires.

Hughes, who co-founded Facebook, and The New Republic’s Chief Executive Officer Guy Vidra had announced plans to turn the publication into a “vertically integrated digital media company,” hoping to generate more revenue from a surge of online content.

New Republic alum James Kirchick, who served as an assistant editor and contributing editor for the magazine from 2007 until last year, told TheWrap that he’s “very distressed” about the current state of the magazine.

“I am very distressed about what’s happened, but the New Republic didn’t die this week; it died when Chris Hughes bought the magazine,” said Kirchick, who, along with Eli Lake, Charles Krauthammer, Lawrence Kaplan and Peter Beinart, was dropped from the masthead in 2013.

Read the full memo that Snyder sent to his staff on Wednesday:

I have some good news to share: The New Republic is adding four tremendously talented people to our ranks.

Jamil Smith is joining us as a Senior Editor. For the last four years, Jamil has been a producer at MSNBC, first for The Rachel Maddow Show and most recently Melissa Harris-Perry. As a writer and editor, he’s emerged as an influential voice, especially on matters concerning race, politics, and gender. He will be editing and writing on those topics for The New Republic in addition to putting his multimedia skills to use as he helps us launch our own podcast series and helps shape our video offerings. Jamil will start on January 26 and will be based in New York.

Elspeth Reeve is also joining as a Senior Editor. I had the pleasure of working closely with Elle for three years while we were both at The Atlantic Wire. I watched her flourish into a star, first as a writer, covering everything from the 2012 Republican primary to the London Olympics and then as the politics editor. At The New Republic, she’ll continue to write about the political landscape, including the 2016 campaign, as well as experiment with the kinds of creative digital storytelling techniques (her GIF guides to gymnastics were instant classics) for which she is known. She was most recently at First Look Media where she worked on Racket, the digital magazine the company was preparing to launch. Elle (pronounced “Ell-ee” — which I learned the hard way) is starting on January 26 and will also be based in New York.

Bijan Stephen is joining us as an Associate Editor. Until recently an editorial assistant at Vanity Fair, Bijan has been published all over town: The Paris Review, n+1, Matter, Vice, and of course his daily “intern” contribution to the media newsletter Today in Tabs. Here he will focus on editing for the web site and magazine while continuing to write. Bijan starts in New York on January 20.

Cathy Park Hong is taking over as Poetry Editor. The winner of the Barnard Women Poets Prize, Cathy has published three collections of poetry, most recently Engine Empire, and her poems have appeared, among other places, in The Paris Review, The Baffler, and McSweeney’s. She currently teaches poetry at Sarah Lawrence College and her first selections will appear in the February issue.

This is the first wave of new hires we’ll be making, including in the DC office, so I’ll have more exciting updates soon on the staffing front in addition to continuing to add to our roster of contributors.