Leonardo DiCaprio‘s “The Revenant” ended up at No. 1 at the weekend box office with an estimated $16 million Sunday, but moviegoers’ safety became the primary concern as Winter Storm Jonas paralyzed the East Coast and claimed at least 18 lives.

The largest movie theater chains, including AMC, Regal and Cinemark, were forced to close locations in New York, Washington, D.C., Philadelphia, Baltimore and other large cities as the record blizzard knocked out power, made traveling impossible, forced state of emergency declarations in 11 states and dumped as much as 40 inches of snow in some Eastern seaboard communities.

Last weekend’s champ “Ride Along 2” fell to third with nearly $13 million, behind “Star Wars: The Force Awakens” with $15 million. 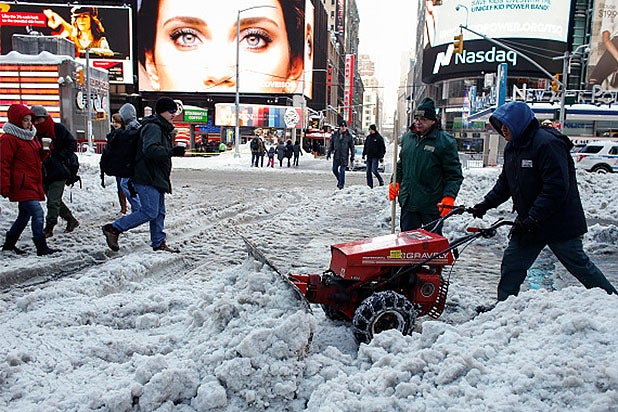 The R-rated Robert De Niro-Zac Efron comedy “Dirty Grandpa” did the best of three wide opening movies with $11.5 million and was fourth for Lionsgate. STX and Lakeshore Entertainment’s PG-13 horror tale “The Boy” was just behind that with $11.3 million and “The 5th Wave,” Sony’s young adult sci-fi thriller starring Chloe Grace Moretz, was sixth with $10.7 million.

Despite the Eastern closures, all three wide openers came in at, or above, projections for the weekend.

“We’re very happy, given the circumstances,” STX distribution chief Kevin Grayson told TheWrap, after “The Boy,” a $10 million horror film starring Lauren Cohan from TV’s “Walking Dead,” drew an audience that was 62 percent female, 75 percent under the age of 25 and 41 percent Hispanic. 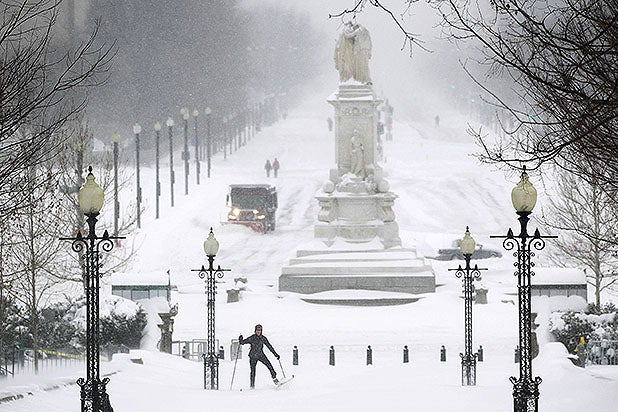 A woman skis on a snow-covered street in Washington, DC (Getty Images)

“We’re hearing reports of sunny skies in New York and Washington and they’ll need some time to dig out from the snow, but I think people will be ready to get out and do something today after being cooped up all weekend.” he said. “And with our audience made up of mainly young women who aren’t interested in football, we should be in good shape.”

He was referring to the NFL championship games, which determine the Super Bowl participants and were set to kick off Sunday. With male fans glued to their couches and the potential for bad weather, the studios in previous years have steered clear of major releases on this weekend after the holiday rush and before the Oscar push hits its peak. This weekend’s overall box office was off roughly 25 percent from last year, when “American Sniper” was on a record-breaking run and won the weekend with $64 million.

Despite savage reviews that left it at a dismal six percent positive on Rotten Tomatoes, “Dirty Grandpa” received a “B” CinemaScore from first-night audiences.  The animated family film “Norm of the North” nabbed the ninth spot with $4.1 million, giving the studio two top ten films.

The “Dirty Granpa” debut ranks at the low end of DeNiro’s recent comedy films. It was below this year’s “The Intern” ($17.7 million) and 2013’s “Last Vegas,” ($16 million), but better than “Grudge Match” ($7 million). However, it was a decent rebound for , whose last outing “We Are Your Friends” bombed in August.

Sony’s “The 5th Wave,” a $38 million young adult thriller, saw its $10.7 million domestic weekend outstripped by its foreign haul of $16 million, which featured No. 1 debuts Brazil, Spain and Russia.