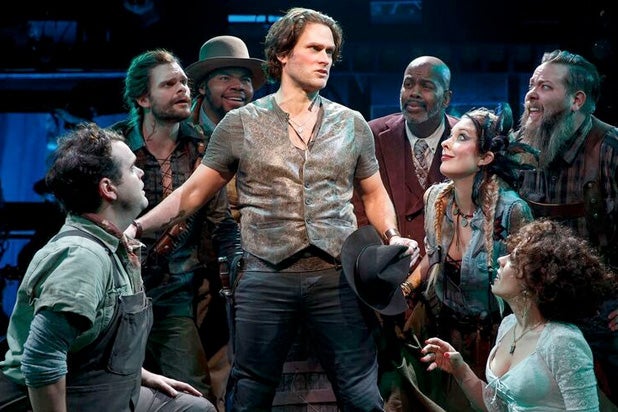 It’s time for Alex Timbers to direct a traditional Broadway musical like “Hello, Dolly!” or “Showboat.” His eccentric minimalism has brought him Tony nominations for directing such small-scale works as “Bloody Bloody Andrew Jackson” and “Peter and the Starcatcher.”

In Timbers’ world, a bolt of blue fabric turns into a waterfall, a piece of rope defines the parameters of a shed, the musicians play on stage, the actors sit around watching each other perform.

Timbers now brings us an Off Broadway revival of Alfred Uhry and Robert Waldman’s musical “The Robber Bridegroom,”‘ which opened Sunday at Roundabout’s Laura Pels Theatre. It’s so in the vein of “Jackson” and “Starcatcher” that it appears to have directly spawned those shows, even though “Bridegroom” was first staged in 1975. A year later, “Bridegroom” had a short run on Broadway.

Back then, Uhry and Waldman’s musical had its charms because its small cast and presentational approach was so different from the dance shows that Michael Bennett and Bob Fosse were doing, not to mention Hal Prince’s lavish productions of Stephen Sondheim‘s musicals.

Then and now, “Bridegroom” is blessed with a charismatic male lead, with Steven Pasquale taking over the role that earned a Tony for Barry Bostwick in 1977 (Raul Julia and Kevin Kline also played the part). Pasquale brings his easy, natural charm to the stage. He’s that rare musical performer who never forces, which doesn’t always work to his favor when it comes to awards: He wasn’t even nominated for a Tony for his irresistible photographer in “The Bridges of Madison County” two years ago.

Pasquale also possesses a great singing voice that fits to perfection Waldman’s lovely ballads and rousing shit-kicker specials. In fact, there isn’t one mediocre voice in the whole “Bridegroom” cast, and the sound design of Darron L. West and Charles Coes makes the amplification what it should be: undetectable.

When’s the last time you went to a musical in a New York theater, on Broadway or off, where the singing voices weren’t completely disembodied from the actors’ bodies? Kudos to West and Coes. Why can’t more shows sound like this one?

And now for the dropping of the other cowboy boot.

“The Robber Bridegroom” isn’t a very good musical, frankly. Uhry’s book is not only slight, it’s a mess. Timbers stages “Bridegroom” as a show within a show, but there’s no story for the first 20 minutes, which is a problem for a musical that’s only 90 minutes long. Instead, we’re supposed to be charmed by the oddball country doings of characters named Goat, Little Harp, Big Harp, and anyone else who begins and starts a sentence with exclamations like “by cracky.”

The story is dormant until the woodsman robber (Pasquale) meets up with the rich country girl (Ahna O’Reilly) and steals her new dress and later, something else.

O’Reilly is delectable as Rosamund, but Uhry’s book frequently requires her to impersonate Lucy Ricardo from a hillbilly episode of “I Love Lucy.” (The robber impersonates a country gentleman, and he and she don’t recognize each other from the night before. It’s tedious just writing that sentence.) Suddenly, O’Reilly is infected by whatever ails Goat, Little Harp, and Big Harp. Except for Pasquale, the cast appears to have come down with a bad case of “Hee-Haw.”

A New York theater critic shouldn’t argue with Uhry about what’s genuinely Southern, but never does this “Bridegroom” appear to be taking place in Mississippi and Louisiana. This is the sticks of Ma and Pa Kettle.