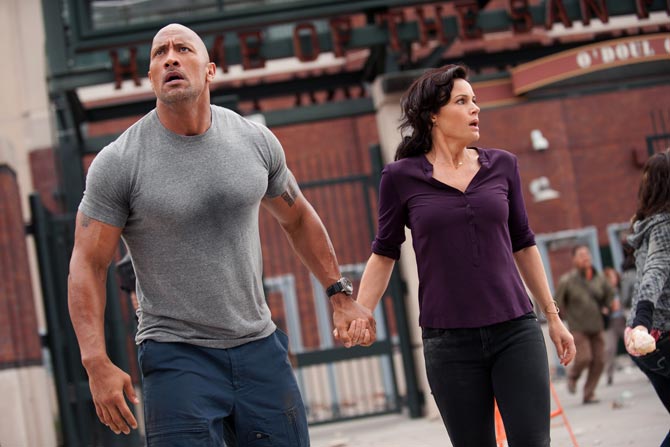 “San Andreas” jolted the box office with an $18.2 million first day that put the earthquake disaster saga on course to knock off “Tomorrowland” for the top spot and take in more than $45 million for the three days — and it was star Dwayne “The Rock” Johnson’s fault.

The former wrestling champ flexed his box-office muscle and the big opening for the Brad Peyton-directed “San Andreas” — an original film with a screenplay by Carlson Cuse — left its rivals in the rubble.

Universal’s musical comedy “Pitch Perfect 2” was a distant second with $4.5 million on Friday leaving it on pace for a $14 million third week, and is closing in on $150 million domestically.  The R-rated Tom Hardy road rage romp “Mad Max: Fury Road” and Disney’s “Tomorrowland” were just behind and heading for $13 million.

That would be a sizable drop of more than 60 percent for “Tomorrowland,” the sci-fi adventure directed by Brad Bird and starring George Clooney, Hugh Laurie and Britt Robertson, and leave it with a domestic total of less than $60 million after two weeks.

“Aloha,” writer-director Cameron Crowe‘s romantic comedy starring Bradley Cooper and Emma Stone, took in an estimated $3.6 million on Friday and is heading for a soft $10-11 million for Sony, in line with analysts’  low expectations.

“Aloha” could fall as low as sixth place this weekend, behind “Avengers: Age of Ultron.” The Marvel superhero sequel is on pace to lift its domestic total past $425 million for Disney by Sunday and has overtaken Disney’s animated hit “Frozen” as No. 6 on the all-time global box-office list with $1.51 billion.

Fox’s “Poltergeist” took in $2.6 million and was seventh Friday, putting it on pace for an $8 million second weekend, which would be a 66 percent drop. That’s steep, but typical for horror movies, even sequels that come 33 years after the original like this one.

George Miller‘s “Mad Max: Fury Road” is pacing to come in around 45 percent below its second weekend, and should lift its total to $115 million by Sunday for Warner Bros.

Sony is hoping the mature-skewing “Aloha” can be an alternative for mature audiences amid the superheroes and sequels that dominate summer. but that will take positive word of mouth, and the reviews has been poor and audiences Friday gave it a weak “B-” CinemaScore.

If it doesn’t pick up steam, it won’t be a financial disaster for the studio, since the “Aloha” production budget was $37 million and Regency Enterprises, LStar Capital and RatPac Entertainment co-financed and Fox is overseeing international.

The reviews of “San Andreas” haven’t been great either — 49 percent on Rotten  Tomatoes — but audiences awarded an “A-” CinemaScore to the PG-13-rated action film co-starring Paul Giamatti, Carla Gugino, Alexandra Daddario and Joan Gruffudd.

Also Read: Pixar's 'Inside Out' Tracking for $60 Million Debut

Warner Bros.was looking for a big start from the effects-heavy “San Andreas,” since it cost $110 million to make, and the disaster film is outpacing analysts’ pre-release forecasts.

Universal’s “Furious 7” was in 11th place Friday. If it does fall out of the top ten, it will be the first time in more than two months. The cops-and-criminals action epic will pass the $350 million mark domestically this weekend and has taken in $1.5 billion worldwide. It’s third on the all-time global box office list, behind only “Avatar”($2.7 billion) and “Titanic” ($2.1 billion).