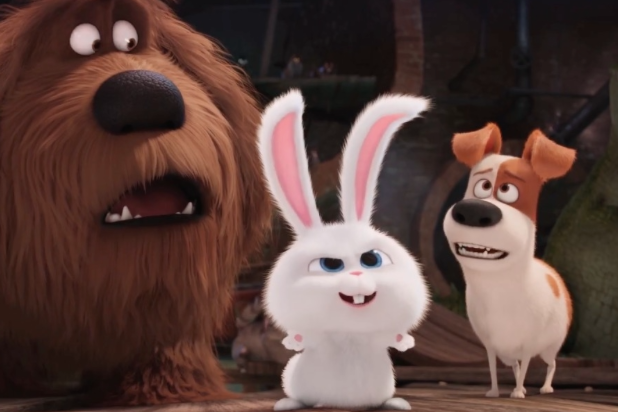 Disney-Pixar’s “Finding Dory” will finally end its run at No. 1 when Illumination Entertainment and Universal Pictures’ animated original “The Secret Life of Pets” wags its tail at moviegoers this weekend in 4,300 theaters.

The studio expects the animated feature to open north of its 2010 “Despicable Me” numbers — $56.4 million — which would likely easily beat “Dory” as it plays in its fourth weekend in theaters.

Industry analysts have dramatically higher estimates for “Pets,” predicting a domestic debut somewhere between $75 and $80 million.

Given the $75 million production budget, the PG-rated movie is poised to be a major moneymaker for Universal — especially since animated features tend to have lower percentage drops week over week, and kids on summer break are free to watch.

The lead character in “Secret Life of Pets” is a terrier named Max, voiced by Louis C.K., who goes on an odyssey through New York City with his newly-adopted roommate Duke — a massive furry brown dog voiced by Eric Stonestreet — as they try to make their way back home.

As Max struggles to reunite with his owner, he runs into an adorable, streetwise bunny named Snowball, voiced by a scene stealing Kevin Hart. Meanwhile Gidget (Jenny Slate), a sweet and witty white Pomeranian, is desperate to find her beloved Max, on whom she has a huge doggy crush.

Meanwhile, 20th Century Fox comedy “Mike and Dave Need Wedding Dates” is expected to have a much lighter landing than “Secret Life of Pets,” with forecasts setting opening grosses somewhere in the low double digits, likely more than $11 million.

That’s not great news for a film starring Zac Efron, Anna Kendrick and Aubrey Plaza that was made for $33 million, not counting marketing costs.

Opening in 2,980 locations, debut feature director Jake Szymanski’s R-rated comedy stars Kendrick and Plaza as a couple of hapless girlfriends who agree to be the wedding dates of two guys, played by Efron and Adam Devine. Their main motivation is the free trip to Hawaii that comes with the job.

In addition to the lead cast, keep your eyes peeled for a side splitting cameo by “Silicon Valley” star Kumail Nanjiani, who plays a masseur whose techniques are extremely unconventiounal.