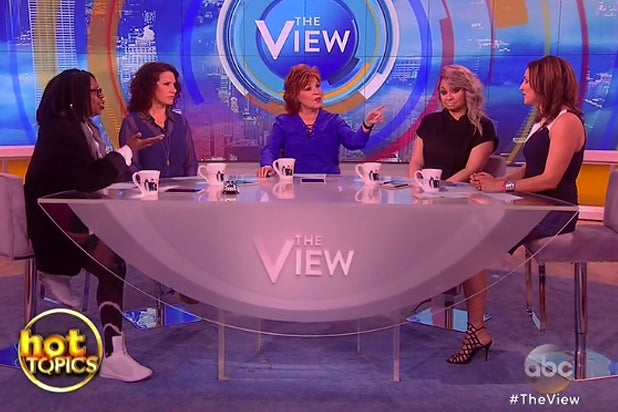 Donald Trump is ramping up his attacks against Hillary Clinton, and the panelists of “The View” were not having it on Monday.

The ladies had a field day with Trump’s recent speech where he called her husband, former President Bill Clinton, “the worst abuser of women in the history of politics,” and then called Hillary “an enabler” who treated Bill’s accusers “horribly.”

The majority of the panelists mocked Trump’s hypocrisy by comparing his statements to a 2008 interview, during which he downplayed Bill’s affairs in the White House. But Paula Faris was the one dissenting voice among the group.

“She’s going on campuses and work places and saying, we have to take victims of sexual assault seriously,” she said. “And then you look at how it was handled back in the ’90s when you had women that came forward and said I had relations with him… They were destroyed. And Monica Lewinsky was called, quote, ‘a narcissistic looney toon.'”

Faris continued, “Why should we blame the woman?”

Goldberg added that it’s a similar situation to Trump’s own past: Trump’s first wife, Ivana Trump, had unflattering things to say about his mistress, Marla Maples, in her tell-all book.

“When her husband was accused of this, before he became President, [Hillary] had to sit on television and listen to all of this,” said Goldberg. “Now, what they do in their life and their relationship, I would say Donald, I’d ask Ivana or read her book and see how she felt about the girl that he was fooling around with.”

“It’s not going to help her if she’s sending e-mails about claiming the woman card,” reiterated Faris. “That’s all I’m saying.”

But all this is just distraction from the real issues, according to Joy Behar.