Former presidential candidate Carson appeared on the ABC talk show Thursday to face a panel that seemed intent on tearing him to shreds — verbally, anyway — over his endorsement of former political rival and GOP frontrunner Donald Trump.

Carson attempted to defend his endorsement by saying that the billionaire businessman is the best bet to protect America from the ruling political class.

“When I dropped out, my first choice went with me. I was gonna remain neutral, but then I realized that the political establishment was aligning to protect their turf,” Carson said. “And they don’t like the idea of people who are not beholden to them and who cannot be controlled coming into Washington, D.C., and that was one of the reasons they didn’t like me very much, but I was easier to get rid of than Donald Trump.” 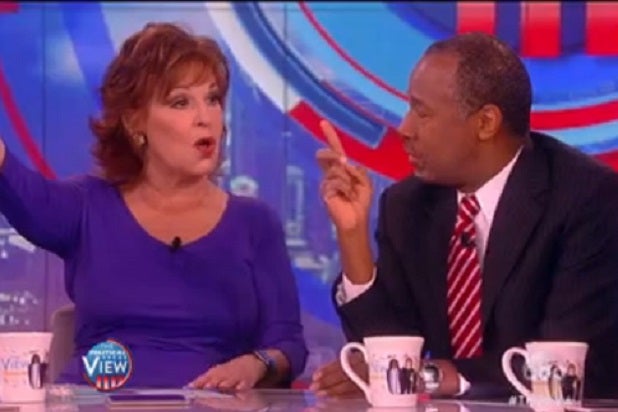 That argument failed to hold water for Goldberg, who brought up that Trump “has bashed women and made countless racist remarks.

“Why would you align yourself with that?” Goldberg asked.

“You have to look at the good and the bad. There is no perfect person,” Carson replied. “Has he said some things that I wouldn’t say or that you wouldn’t say? Of course.”

Reminded by guest panelist Sunny Hostin that Trump was sued by the Justice Department in the ’70s for not allowing black tenants in his community, Carson turned to the example set by Trump’s children.

“I always say one of the ways that you measure a person is looking at their children, and how their children act,” Carson offered. “The fact of the matter is, they have been raised very well, they’re very respectful.”

Carson again attempted to turn the topic back to the “ruling class” that is “so threatened by anybody who’s not beholden to them.” And, again, Goldberg held his feet to the fire.

“You can say that until the cows come home, sir,” Goldberg shot back. “This guy is, I’m sorry, he’s a racist, and he’s not good for the country.

“You’re Ben Carson, you’re so much better than this!” Goldberg insisted.

During her own turn at the punching bag that was Ben Carson, Joy Behar recalled that Trump has also taken shots at the retired neurosurgeon, including comparing him to a child molester.

“If it were about me, I would be offended. But it’s about America. We have to save this nation,” Carson responded.

“Tell me a politician who doesn’t tell lies,” Carson replied.

During his appearance, Carson also insisted that he hadn’t been offered a position in Trump’s cabinet in exchange for his endorsement.

If Thursday’s fiasco was any indication, Carson may hit up Trump to borrow his security detail the next time he agrees to appear on “The View.”