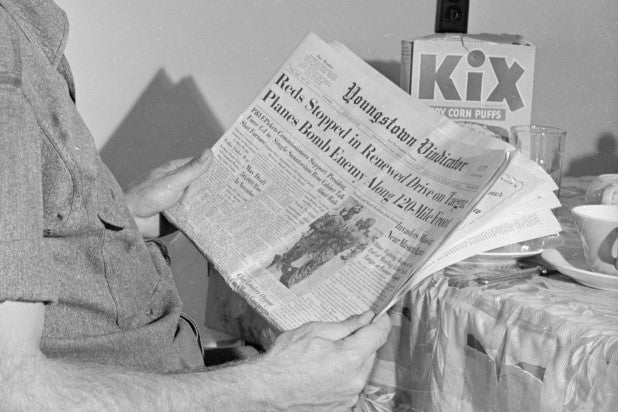 The Vindicator, the daily newspaper that covered Youngstown, Ohio, for a century and a half, is closing.

WFMJ — the local television station owned by the same family as The Vindicator — confirmed the news on its website on Friday. WFMJ reported that Vindicator staffers were informed about the closure via letter from the paper’s general manager Mark Brown and publisher Betty J.H. Brown Jagnow. A letter to the readership explaining the decision will be published in Saturday’s Vindicator.

Columnist Bertram de Souza, a 40-year veteran of the Vindicator, said owners had sought out buyers but were unable to find one. The paper will stop printing at the end of August.

“Unfortunately, the reality of our industry hit home — literally. It’s painful, for somebody like me, who has dedicated my life,” de Souza said.

“We have been at the forefront of fighting public corruption in the Valley,” he added. Additionally, he noted that the paper has provided a daily record of weddings, deaths and club meetings and “all of the stuff that makes a local newspaper important to a community.”

“It’s stunning news for us, internally, and it’s going to be stunning for the community over the next days and weeks, especially a community that’s endured as much as the Valley has, most recently with the [General Motors] Lordstown closure,” said Franko. “We’re as vintage a brand as GM, and it’s tough for all of us. Obviously, my first concerns are for my coworkers and the people who have spent decades here, but I’m also sad for the Valley and what they’re going to lose. It’s a loss for thousands.”

Also Read: Black Woman Hired as New Editor and Publisher of Alabama Newspaper That Called for KKK to 'Ride Again'

The paper was first published by James H. Odell as the weekly Mahoning Vindicator on June 25, 1869, and just recently celebrated its 150th anniversary.

The closure comes amid a challenging time for local newspapers. In the last decade and a half, nearly one in five newspapers has shuttered, according to research by the University of North Carolina’s Center for Innovation and Stability in Local Media.

One of the many to express shock over the paper’s closing was Ohio Congressman Tim Ryan, who took part in the first round of the Democratic debates on Wednesday.

This is heartbreaking. The Vindicator has been a pillar in our community, and its reporters and staff have always been unwavering in their commitment to truth and transparency.

Local newspapers are critical to our democracy. We need to support them.https://t.co/LuUR4HVhHF