As the final countdown to the 2016 Oscars begins, an Oscar race that began in complete chaos has finally begun to find some clarity…except when it comes to the top prize.

As the campaign hits the home stretch, the race for Best Picture is still very much up in the air. “The Revenant” and “Spotlight” are still the frontrunners with “The Big Short” as a dark horse. But “Mad Max: Fury Road” also remains a presence, buoyed by the support of its fan base and numerous film critics.

So before the envelopes and trophies arrive at the Dolby Theatre, we took a tally of 42 awards handed out by various guilds and critics circles. The results show a strong consensus in some categories, while others show a split in opinion between the critic and industry voting blocs. 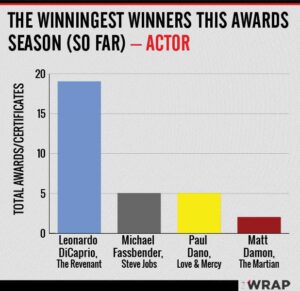 The Best Actor tally just confirmed what we all already knew: Oscar Sunday will be the day of Leonardo DiCaprio‘s coronation. DiCaprio has taken almost every single major acting award this awards season. In a distant second is Michael Fassbender, whose biggest awards victory came from the Los Angeles Film Critics Association. 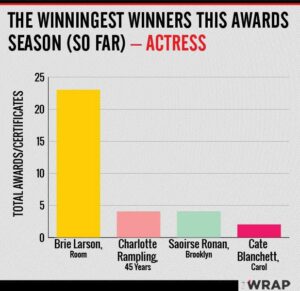 The same can be said for Brie Larson, who is leading the Best Actress tally by a margin that is almost as wide. Her main Oscar competitors divided a smattering of critics’ awards among themselves, but the SAG, BAFTA and Golden Globe have gone to the “Room” star. 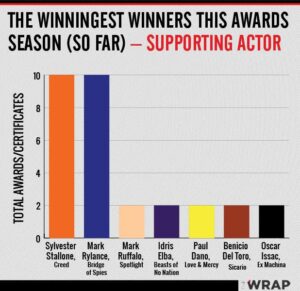 The results for the supporting roles are more interesting. For Best Supporting Actor, we got a tie between Sylvester Stallone for “Creed” and Mark Rylance for “Bridge of Spies.” They each have major awards to their names, with Stallone taking the Globe and Rylance taking the BAFTA. It should be noted, though, that the BAFTAs tend to give the nod more to Brits like Rylance. With that in mind, we’ll give the edge to Stallone, but don’t be surprised if Rylance gets a dark-horse win. Of the other actors on our chart, only Mark Ruffalo is nominated for an Oscar, while Idris Elba, whose snub helped fuel #OscarsSoWhite, checks in with a SAG win. 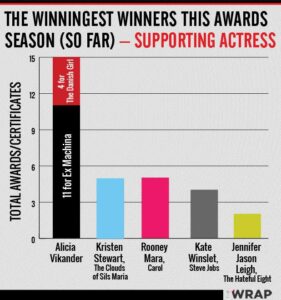 The Best Supporting Actress race seems to be Alicia Vikander‘s to lose, but a deeper look shows the critic/guild split on what was most impressive about her breakthrough year. Her wins from the city critic circles are primarily for “Ex Machina,” but her biggest wins — SAG, Critics Choice, Satellite — are for “The Danish Girl.” She’s up at the Oscars for the latter, so her SAG win shows that she has a major shot, but Kate Winslet‘s handful of wins include a Globe and a BAFTA. Winslet is in a similar spot as Rylance, trying to pick up a win to allow “Steve Jobs” to save some face. 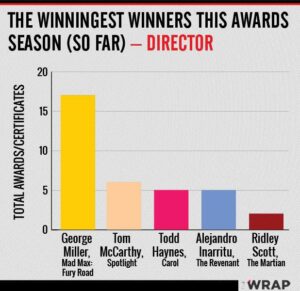 For Best Director, the critics are clear: they love George Miller. Going into awards season, Miller was considered the best chance for “Mad Max: Fury Road” to score a big win, and if the circle awards were in charge, that big win would become a reality. Tom McCarthy has also made himself into a dark horse with his work on “Spotlight,” while defending champ Alejandro Inarritu only scored five wins on our tally. However, one of those five wins was the Directors’ Guild Award, whose winners almost always go on to take the Oscar. Barring a major upset, the Academy won’t belong to the Mad. 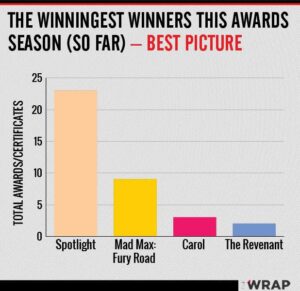 Finally, there is Best Picture, where a strong case can be made for several contenders depending on how you look at the numbers. “Spotlight” has the biggest haul in the top category, with wins from the Critics’ Choice and Satellite Awards. It also has the Best Ensemble SAG award and the WGA award for original screenplay. “Fury Road” is in second with wins from the Chicago Critics Association and the National Board of Review. Then there’s “The Revenant,” which only has two wins…but they are the Golden Globe and the BAFTA. Combine that with Inarritu’s DGA win, and all the widespread praise for “Spotlight” and “Fury Road” may only be a minor speed bump en route to Inarritu’s back-to-back Oscar triumphs.

Jerry Lewis Improvises Oscars Finale for 20 Minutes (1959)< /b> Lewis hosted the show in 1959, but for some reason, the show ended 20 minutes early, so he improvised a monologue for the rest of the show, which was joked about for many years after that.
View In Gallery
x
Looks like you're enjoying reading