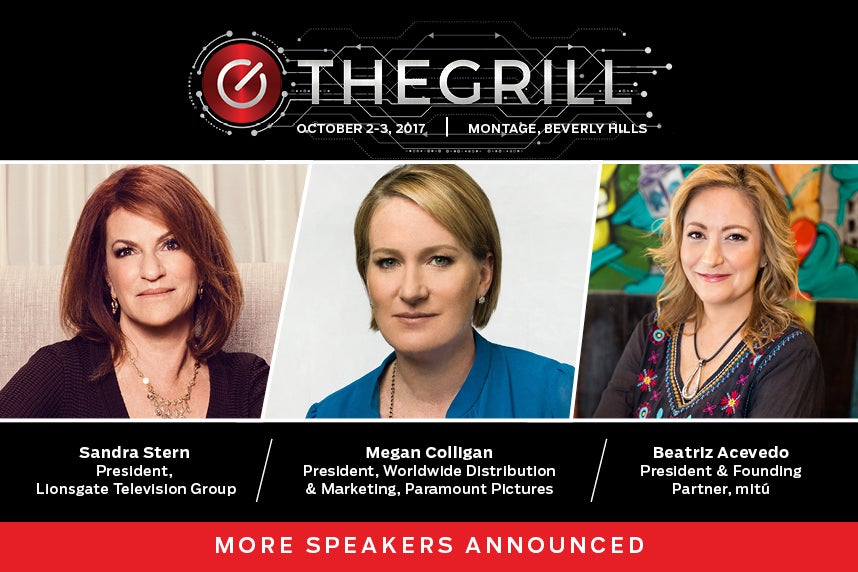 TheGrill is pleased to announce new speakers and topics for this year’s conference on October 2 and 3.

The three executives join other business thought leaders and innovators including Jason Hirschhorn of Media REDEF, Rich Greenfield of BTIG Research, Chris Williams of pocket.watch, Dave Shull of The Weather Channel, and Thai Randolph of Kevin Hart’s Laugh Out Loud who will debate the future of entertainment and technology at Montage Beverly Hills on October 2-3, 2017.

New topics added to TheGrill include: The Diversity Challenge — Hollywood and Silicon Valley face a clamor of criticism over entrenched sexism and lack of diversity in casting and the executive suite. With rising awareness in support of inclusivity, many believe that it is still not evolving fast enough. TheGrill brings together influential voices and people on the front lines of this challenge to discuss solutions.

The conference will also cover: The Revolution in Entertainment Marketing — The tried and true formulas are no longer reliable, but do you really want your whole opening weekend campaign on Twitter? The marketing of entertainment is about cutting through the media cacophony. Hear from the smartest minds in the industry about how to do that, and where change is happening.

Now in its eighth year, TheGrill leads the conversation on convergence between entertainment, media and technology, bringing together newsmakers to debate the challenges and opportunities facing content in the digital age.

Other Hot Topics at TheGrill

Buy your ticket today before prices increase on August 31.

Diverse programming anchored by versatile talent and supported by big brands has always been the hallmark of Hollywood.

As technology brings new models to the fore — in production, distribution, display and monetization — TheGrill is a platform for the leaders, the deciders and the disrupters to explore this reconfigured landscape as it continues to transforms around us.