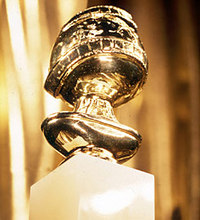 I wrote an op-ed article in today’s Los Angeles Times revisiting one of my favorite causes: cleaning up the Golden Globes. It’s titled, "Hollywood’s Con Job." This year’s cancellation of the show gives NBC what I call "a golden opportunity" to make the Hollywood Foreign Press Association finally open its ranks to the quantity and quality of journalists that would make the awards worthy of being aired on a broadcast network. I write, "The Globes have long been the entertainment industry’s dirty little secret. At the heart of the con is the Hollywood Foreign Press Assn., the tiny, cliquish group of foreign entertainment journalists — and I use each of those terms liberally — whose votes determine the winners." To be clear: my beef is with NBC, and far less with the 82-member HFPA. The group  can hold all the awards it wants, but the telecast has them swimming in cash — $6 million a year — and this has created an absurd situation, a charade propped up by all of Hollywood. I write, "The fact is, the financial weight of the awards show creates intolerable pressure for members. There is constant worry that some misstep will put their prize in jeopardy — the money that pays for trips to film festivals for members, and the status that this year got them invited to drinks with George Clooney and tea with Keira Knightley. The group needs, finally, to open its membership to a far broader pool, to encourage membership of bona fide journalists and critics — maybe even domestic ones. With the timeout provided by the strike, NBC Universal President and Chief Executive Jeff Zucker can make this happen. He should fix the Golden Globes or take them off the air for good." Read the rest