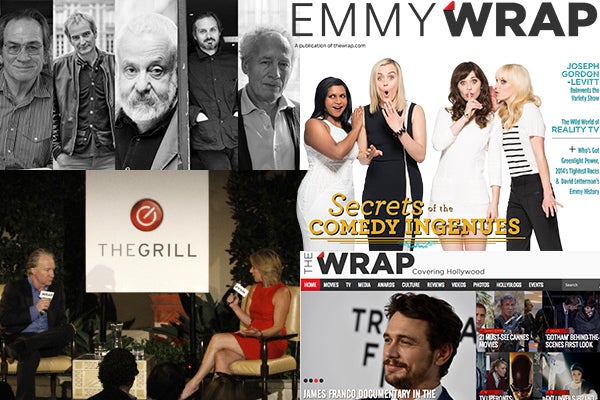 LOS ANGELES (May 14, 2014) – The Wrap News is excited to announce the launch of WrapWire, a syndicated news service that will offer to clients a full array of deeply reported original news from inside the entertainment industry via text, video and unique still photography.

The initiative is part of TheWrap’s next phase of growth on the heels of a phenomenal year of 500% increased traffic and larger editorial staff, after five, award-winning years as the most essential digital news provider in Hollywood.

TheWrap now produces more than 50 stories and video posts from inside Hollywood every day, which includes a 24/7 stream of exclusive news breaks, in-depth analysis, original video and exclusive content from television shows and upcoming movies.

TheWrap’s syndicated offering will include the fastest and most reliable reporting about the weekly box office, multiple daily TV ratings published in real time, movie and television reviews by topline critics as well as analysis of ongoing business and cultural trends in Hollywood entertainment, with a particular focus on new platforms and digital delivery.

The service will provide a broad array of feature stories that go behind the scenes of readers’ favorite movies and television shows, accompanied by beautiful, high quality photography from EmmyWrap and OscarWrap magazines.

“WrapWire is a response to the growing appetite for insider stories about Hollywood that are reported in real time,”  said Sharon Waxman, TheWrap’s CEO and Founder. “TheWrap is one of the few media companies that applies traditional journalism principles to gather news geared to the demands of the digital age. After five years of building a robust source for high quality content on all platforms, the next logical step is to extend that brand to other distributors.”

As part of this new initiative, TheWrap will be ending its four-year exclusive licensing partnership with Reuters.