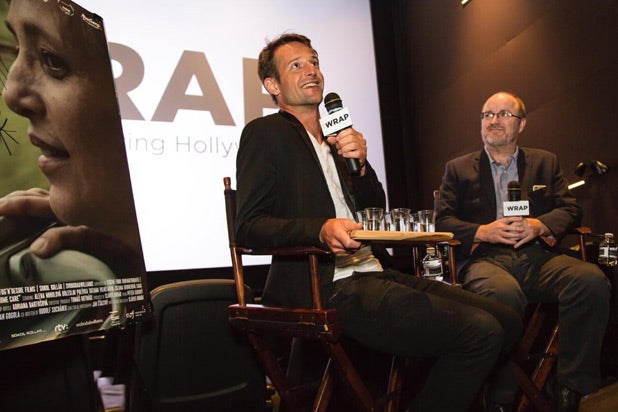 “I wanted to do an anti-Czech movie,” exclaimed director Slávek Horák of his Oscar foreign language submission “Home Care” at TheWrap’s Screening Series on Tuesday.

Not that there’s anything cruel directed at Czechs in his debut film, a tragicomedy that celebrates the quirky slivovitz sippers of his South Moravian hometown, which he called “redneck-ish in a good way.”

“People weren’t seeing the personal films anymore,” said Horák. “They overuse music in a very, very bad way, just to wash over the film and force emotions on you, most of the current Czech movies. I wanted to do the exact opposite.” So Horák scattered scenes with music — a wedding, dance classes — throughout the film, and used no score at all.

The film won Alena Mihulová the Best Actress award at July’s Karlovy Vary festival. Her character, a nurse who does housecalls, and her slivovitz-loving husband are based on the director’s parents. Mihulová even wears Horák’s mom’s clothes in the film.

Asked if he expected his 92-minute debut script and film, shot for $800,000 on handheld cameras with available light in 27 days, to be in the Oscar race, Horák said, “No, no. Crazy! This little movie shot at my parents’ house!”

Making his Academy Awards selection all the more improbable, Horák, 40, is a film-establishment outsider who directed commercials for 20 years.

“The only thing I took from commercials was that I didn’t want [‘Home Care’] to look like a commercial,” said Horák. “I didn’t want to show off what I’d learned with the camera movements and all the fancy stuff; I wanted to keep it as authentic and simple as possible. My DP was crying every day, because it’s his first movie too, and he wanted to show off how good he is, like by how he could light a church. I said, ‘No, exactly not.'”

Horák held a plumwood tray containing shot glasses brimming with a slivovitz-like liquid, and asked screening attendees to ask him a question followed by a shot. “You can drink and drive a little in the U.S., no?” he joked.

Asked whether he shares his leading heroine’s New Age healing beliefs — inspired by Horák’s former live-in girlfriend and 20-year costume director — Horák said, “There are things you can’t explain, you can’t prove. I guess it depends on how open you are. You have to be open to it to let it in.”