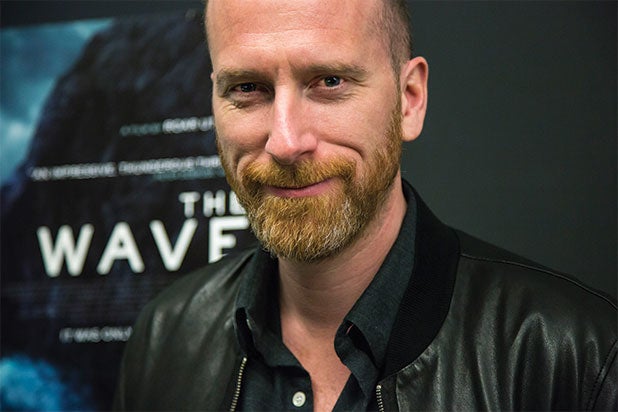 The CGI in Norwegian tsunami drama “The Wave” is simply breathtaking, but so are the real scenes in which the actors of the film were actually submerged in tanks of water and had 10,000 gallons of water pouring in around them.

“It’s a Norwegian company that did those large visual effects shots like the rockslide and the wave,” director Roar Uthaug told the audience attending TheWrap’s Awards Screening Series at the Landmark Theater on Thursday night. “But as soon as the water hit the [main male] actor, that’s real water. When they are in the car, we had 4,000 liters of water hit the back of their heads.”

And for the female lead, Ane Dahl Torp, it got worse. The tsunami hitting the hotel in which Idun (Torp) works is one of the most intense and exhilarating scenes in the film, and the filmmaker revealed that it wasn’t CGI at all. In fact, the lobby was built in a tank in Bucharest, Romania, and 40,000 liters (more than 10,000 gallons) of water was poured into it.

“Ane — she hates water,” Uthaug said with a laugh. “She doesn’t even like to take a bath. She wasn’t quite aware of what she was getting herself into … I think she thought that it was just movie magic, that it’s not for real. She was in the water for a couple weeks.”

The film, Norway’s 2015 official Oscar entry, is based on the true story of a tsunami that killed 40 people when it hit Norwegian village Tafjord on April 7, 1934. The city of Geiranger, where the film is set, is surrounded by the mountain Akerneset, which is constantly threatening to collapse into the fjord — a long, narrow, deep inlet of the sea between high cliffs. Akerneset is a system of cracks 800 meters long that keep expanding to 15 cm per year. When it falls into the fjord, it could cause an 80-meter tsunami that could hit Geiranger in just 10 minutes.

In the film, the wave destroys everything in its way as it approaches the town.

To train for the crazy scenes in which both Torp and male lead Kristoffer Joner (Kristian) were totally submerged in water, they were put through a boot camp where they had a free driving instructor who taught them about being in and under the water. They were also taught exercises to hold their breath — Torp held her breath for three minutes, while Joner managed three minutes and 17 seconds.

The film cost $6 million to make, which is significantly more expensive than the average $2 million to $3 million budget Uthaug said most Norwegian films have. And the scenes were shot with local residents of Geiranger, a city that only has 300 residents but gets over one million tourists a year due to it being a UNESCO heritage site with some of the most spectacular scenery in the world.

“We shot it in the community that will hit by the wave,” said Uthaug. “At first, there was some skepticism. All the people running [from the tsunami], those were all local people being extras and they came over after the shoot and thanked me and it was a lifetime experience of them.”

CGI and water training aside, the hardest thing for Uthaug while shooting the disaster film was the lighting. He said that the crew couldn’t afford artificial lighting, so they had to depend on natural light, which had to be dark enough to show car headlights but bright enough to show the wave approaching.

“Because we wanted the wave to come at night, the light had to be right so the headlights of the cars would light up but also wouldn’t be too dark so we could see the wave,” he said. “So that gave us three hours to shoot.”

And because Geiranger is such a tourist destination, the crew had to remove all the piled up cars used to show the aftermath of the wave for the many tourist buses to come through, let them pass, and then put the cars back in place to shoot.

The reception of the film, according to Uthaug, has been stellar. Currently, it is the highest-grossing film in Norway, surpassing “Jurassic World” and “Furious 7.” The film has made $800,000, in a country that only has a population of five million.

The film is being used to raise awareness about this dangerous part of the world. Geologists have received a lot of press and Uthaug hopes that the film will give them for funding for research. However, Uthaug admits that the film flubbed a fact. In reality, geologists believe that if they see signs of this mountain cracking, they will have weeks, months or even years to evacuate the city — not 10 minutes.

Because of the film’s success, Uthaug has been reading scripts in Los Angeles, and he was recently signed by UTA.