Election Day put a two-week-long pin in “This Is Us” fans’ plans to find out what happened to Randall’s (Sterling K. Brown) biological mother, Laurel (Jennifer Holmes), after the Season 5 premiere revealed she did not actually die in childbirth as viewers — and the Pearson family — believed. But with Tuesday’s return of the NBC family drama, we got an itty bitty piece of the puzzle through the introduction of two new characters.

Tonight’s episode, “Changes,” opens on a scene of an older Vietnamese man (played by Vien Hong) and his young granddaughter (Brandilyn Cheah) fishing. We return to these two unnamed characters twice more in the hour, first to see the man in his kitchen preparing the fish he and his grandchild caught, telling her how he learned to cook because he wanted to “impress someone very special” to him. When she asks who it was he wanted to impress, he does not answer, simply teasing her for asking so many questions.

Also Read: 'This Is Us' Creator on What Premiere's Shocking Reveal About Randall's Past Means for His Future

“I will not tell you who I cook for, but I will show how I cook for her,” he says, making the little girl very excited to find out he’s talking about a “her.”

We revisit the two again at the end of the episode, when the fish is done, and the granddaughter asks her grandad to tell her if the woman he has been referring to is the one she sees in “all the pictures” around his house. He confirms, yes, “It’s the woman in all the pictures.” As he serves the little girl the fish, the camera zooms in on a photo of a younger version of the man and he is holding a woman. That woman, if you couldn’t tell right away, is Randall’s biological mother, Laurel.

You can see the photo in question below. 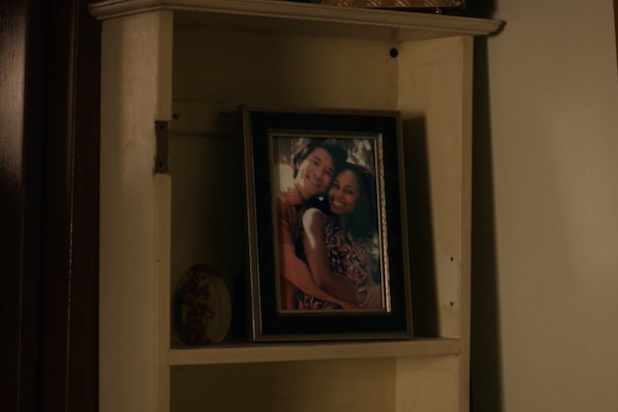 Now, we have absolutely no idea who this man is and how he is connected to Laurel — or at what point in time this particular storyline with his granddaughter is taking place — but “This Is Us” creator Dan Fogelman told reporters after the Season 5 premiere we would be getting answers about Laurel’s story soon.

“There’s obviously a story to tell continuing onward from that moment,” he said, referring to the bombshell cliffhanger that showed Laurel being saved by paramedics from what Randall’s father, William, had always thought was a fatal, post-childbirth overdose of heroin. That assumption was the reason William did not ever return to their apartment after he took baby Randall to give him away for adoption once he thought Laurel was dead and the paramedics were going to call social services to take Randall anyways.

“It’s not something (where) answers will be gotten pretty quickly. Without spoiling too much, I think well within the first half of our season. And certainly, it’s not something that we’re going to drag out a mystery over multiple seasons or anything. There’s a pretty quick answer and I think it will be found to be elegantly done.”

While Fogelman promises there will “definitely” be answers to the questions about whether or not Randall’s biological mother is alive in the present day and what happened after she was revived from her overdose, the NBC family drama’s boss says the season will also reveal who this woman was “well before this moment, well before she met William.”

“This woman who was Randall’s birth mother and hasn’t played a prominent part in our story thus far. Who is she? Where is she from? And what is her story? So that’s a big part of Randall’s journey in the front half of the season.”