After conquering the box office, Marvel superheroes like Thor and Loki are coming to a stage near you.

The plays are written specifically for a high school crowd and can be purchased to be licensed and staged as part of an educational theater market. The stories will explore themes of self-image, understanding vulnerability, adjusting to change, the importance of responsibility, and being true to oneself. 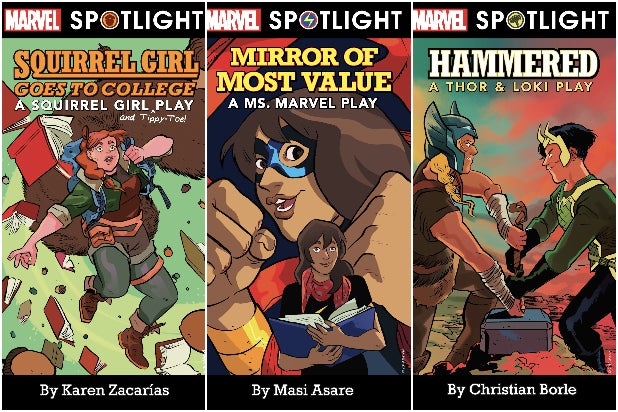 “Mirror of Most Value: A Ms. Marvel Play” is written by Masi Asare, in which Kamala Kahn has to accept herself just as she is–imperfections and all — if she is to become the hero of her dreams. “Squirrel Girl Goes to College: A Squirrel Girl Play” is written by Karen Zacarías, which follows Doreen Green as she attempts to reinvent herself and make “normal” human friends at a new school. And finally, “Hammered: A Thor & Loki Play” is written by Christian Borle, in which teenage Thor and Loki compete for the favor of their parents through Asgardian rites of passage.

“Over the last 80 years, the Marvel Universe has grown to inspire billions across the globe by telling relatable, personal stories reflecting the world outside our window,” Stephen Wacker, vice president of creative and content development at Marvel Entertainment said in a statement. “With these amazing plays and this uncanny group of talented playwrights, we hope to give the next generation of Marvel fans a chance to bring those stories to life and explore what it means to be a Super Hero right in their own backyard.”

“As a life-long comics fan and theatre maker, in the spirit of Marvel Team-Up, it’s a dream come true for Samuel French/Concord Theatricals to partner with Marvel and bring these accessible, affordable plays to young adults across America,”  Sean Patrick Flahaven, president of Concord Theatricals said in a statement. “We hope this will encourage students across the country to embrace their own traits and abilities.”