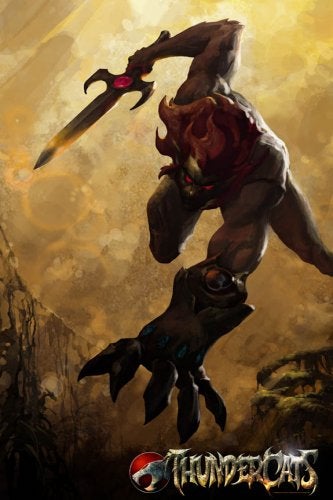 Warner Bros. Animation has announced that Lion-O and his Thundera brethren are set to return to television next year in an anime-style animated series on Cartoon Network.

WBA is promising a "21st century reimagining" of the classic ’80s cartoon. The studio released the first image (left), as well as a teaser poster.

The updated show is supposedly designed to appeal to both longtime fans of the series and newcomers to the planet of Thundera.

WBA described the series as "a sweeping tale combining swords and science and boasting ferocious battles with the highest of stakes, including the grand origin story of Prince Lion-O’s ascension to the throne — and of those who would thwart his destiny at any cost."

WBA is collaborating with Japanese animation Studio4°C ("The Animatrix") to design the look of the classic characters.