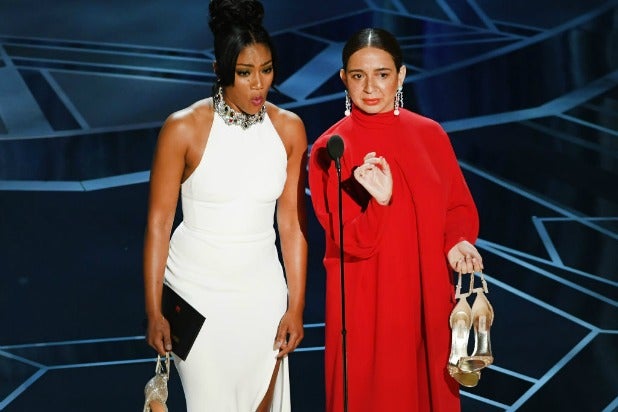 Tiffany Haddish presented with Maya Rudolph at the 90th Academy Awards, wearing a famous dress — the one she wore for her monologue on “SNL.”

Haddish hosted “Saturday Night Live” in November 2017, and joked at length about how much she liked the all-white Alexander McQueen dress.

“I feel like I should be able to wear what i want, when I want, however many times as I want, as long as I Febreze it,” Haddish said. “Like this dress, I wore it on the red carpet for ‘Girls Trip,’ and my whole team they told me, ‘Tiffany, you cannot wear that dress on ‘SNL.’ You already wore it. It’s taboo to wear it twice.’ And I said I don’t give a dang about no taboo. I spent a lot of money on this dress. This dress cost way more than my mortgage. It’s an Alexander McQueen, OK? It’s a $4,000 dress. I’m going to wear this dress multiple times. Real talk, you might see this dress in two sketches tonight.”

Haddish went on to say she’d wear the dress to just about any major event she got invited to, from Bat Mitzvahs to weddings — even her own, if she ever got married again. She even joked she wanted to be married in it.

She made good on the promise. Haddish presented at the Oscars Sunday with Maya Rudolph, and the pair’s rapid-fire jokes marked one of the high points of the ceremony. Haddish didn’t mention the dress in her jokes with “SNL” alumna Rudolph — although they did discuss how bad their shoes were making their feet hurt — or dance in it like she did when she hosted the sketch comedy show.

That didn’t stop eagle-eyed viewers from noting that Haddish is still making sure she got her money’s worth on her Alexander McQueen, though.

The Oscars are almost here, but you don't have to head to the theater to catch up on all the nominees you missed -- most of the major nominees you can watch from the comfort of your living room. Here you'll find the list of every Oscar nominee available for home viewing and where you can find them.