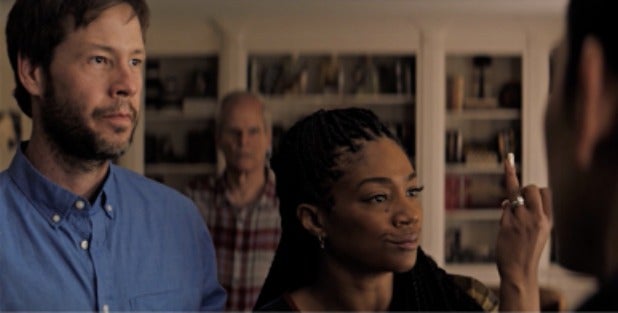 The film, from QC Entertainment and Barinholtz as well as David Stassen’s 23/34 Productions, stars 2017 breakout star Tiffany Haddish along with Barinholtz.

Roadside is eyeing a fall release for the film.

“We are thrilled to partner with Roadside Attractions to bring ‘The Oath’ to audiences everywhere,” said Topic executive vice president of programming and content Adam Pincus in a statement. “Ike’s film flips the traditional Thanksgiving table into a sharp, entertaining statement that’s all too relatable given the times we find ourselves in.”

Based on an script penned by Barinholtz, “The Oath” centers around a man (Barinholtz) and his wife (Haddish) whose Thanksgiving takes a turn when two federal agents — being held captive in their living room — give the extended family something to worry about beyond their typical holiday dinner table political rifts.

“Ike’s hilarious directorial feature debut reinvents the holiday comedy for our times,” said Roadside co-founders Howard Cohen and Eric d’Arbeloff in a statement. “He and Tiffany make one of the greatest on-screen couples we’ve seen, and their family Thanksgiving troubles will have audiences laughing at our uncertain political madness without checking their intelligence at the gate.”

“We knew immediately in talking to Ike and reading his screenplay that ‘The Oath’ was tapping into something special in a very original way,” said QC’s Sean McKittrick and Ray Mansfield.  “We’re excited that Roadside Attractions and Topic Studios share our passion for bold storytelling and releasing the film in theaters for audiences to discover together.”

Recent QC Entertainment films include “Get Out,” which the company produced and financed, and Spike Lee’s upcoming “BlacKkKlansman,” which won the prestigious Grand Prix Award at this year’s Cannes Film Festival.

Howard Cohen and Ryan Heller negotiated the deal for Roadside Attractions and Topic Studios, respectively. UTA and QC, who co-repped the film for domestic sales, negotiated on behalf of the filmmaker.