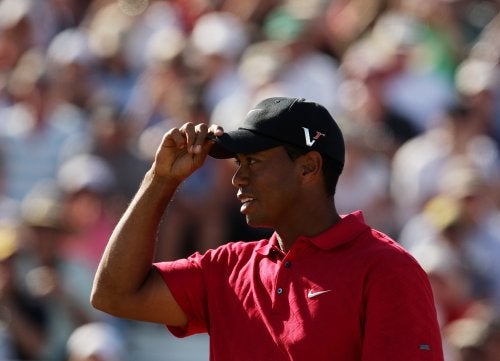 The man’s voice on the phone is desperate, pleading.

The caller, of course, was golfing great Tiger Woods, now reduced to sheepishly putting in the same request that a thousand other philanderers make every year.

The 32-second call was made Nov. 24 and today appears on the TMZ and US Magazine Web sites. It was released by the call’s recipient, Jaimee Grubbs, an L.A. cocktail waitress who until recently was Tiger Mistress No. 2, or No. 1, depending on who you listen to.

Besides Woods’ caught-little-boy tone, what’s remarkable about the message is Woods’ complete lack of affection. No pet names, no pledges of love or good times – just the cold business of getting the girlfriend to take her own name off her phone’s voice message and replace it with a number.

“Yeah, do this for me,” says Woods in conclusion. “Huge. Quickly. All right. Bye.”

Woods’ phone call and the story behind it are pathetic for so many reasons. The first, of course, is the coldly calculated decision of the aptly named Grubbs to archive and release her phone messages from Woods. This doesn’t even look like a case of kiss-and-tell; it’s more like a rope-a-dope scenario in which Bagger Vance was set up.

Grubbs must’ve had a Ka-ching! ringtone linked to Woods’ cell number – one can easily imagine her listening with a grin on the other end to Woods’ plea as he made it, but refusing to pick up the phone to answer him.

But the half-minute call is also absurdly sad because Woods is using the very technology that gets every cheater in trouble – and, in the process, only digging himself into a deeper sand trap.

Worse still is Woods’ groveling plea, in which he asks his mistress to do him this great favor – but only “if you can.”

If you can? Either he needs her to do this for him or he doesn’t. Or, perhaps, he suspects Grubbs is so stupid that she doesn’t know how to change her answering machine.

If Woods had just attended his own charity’s tournament this week in Thousand Oaks, instead of dropping out, he wouldn’t be in this mess as deeply as he is now.

If he had just come forward and brushed off the media queries about his sex life with a shrugging, “Oh come on, man!” the paps and celebrity press would’ve moved on to more promising prey.

But no. Tiger had to withdraw and squirm. Tiger had to act contrite, had to apologize, had to act tormented and, worst of all, ask for privacy in a culture of total exposure. He wants us to do this for him quickly. Because, yeah, this is huge.