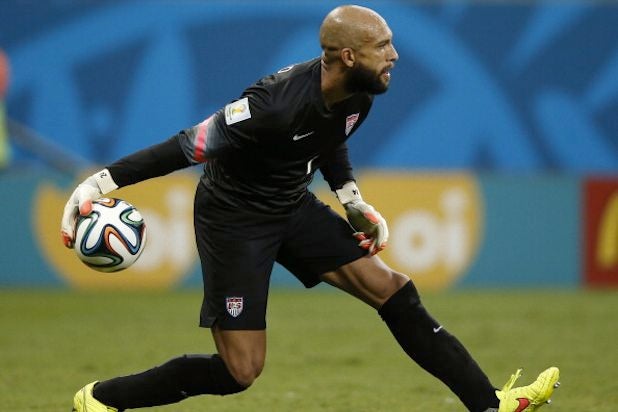 Team USA goalie and World Cup star Tim Howard is returning to NBC Sports as an analyst for its Premier League games this season.

Howard’s new multi-year deal will be structured around Everton’s games — the team he plays for in the same Barclays league.

The goalkeeper will work up to 10 “top-tiered” Premier League games this season, serving as game analyst in the booth or in an on-site studio for the pre-game, halftime and post-game shows, NBC Sports said in a press release on Tuesday. Last season, Howard worked as an NBC Sports analyst for six game telecasts and one on-site studio last season.

See photo: USA Men’s Soccer Goalie Tim Howard Was the Secretary of Defense for a Brief Moment in History

“Tim had an impressive debut on our telecasts last season and we are excited to have him join our Premier League team on a more extensive basis,” said Pierre Moossa, coordinating producer of NBC Sports Group’s Premier League coverage. “As an active Premier League player, he contributes unique perspective and insight to our broadcasts.”

“I had such a great experience last season and am excited and honored to re-join the NBC Sports team,” added Howard. “Their coverage of the Premier League is fantastic and helps bring the passion of the games to America. I look forward to doing what I can to add to that.”

In the recently concluded FIFA World Cup, Howard led the United States to a second-place finish in group play and recorded 16 saves in the U.S. team’s 2-1 loss to Belgium in the Round of 16 — the most saves in a World Cup match since 1966. Howard has been the top goalkeeper for the U.S. Men’s National Team since 2007 and earned FIFA’s Golden Glove award — given to the best goalie — for his performance in the 2009 Confederations Cup, which included an eight-save showing in the team’s semifinal win over Spain.