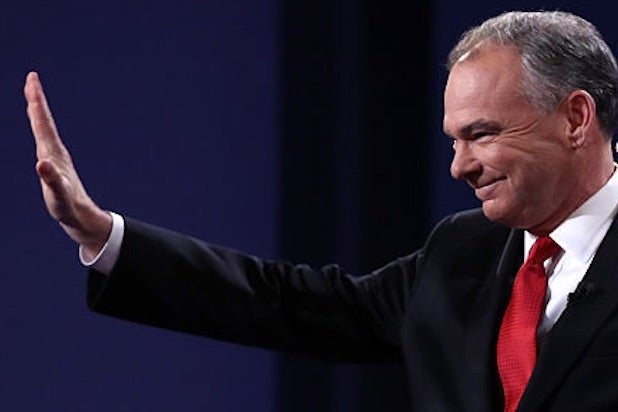 Fresh off his performance at the VP debate this week, Tim Kaine is swinging by Los Angeles on Saturday, October 8, for a fundraising event at the home of Andrew and Ellen Bronfman Hauptman, according to an invitation obtained by TheWrap.

The fundraiser, which features a special performance by Corinne Bailey Rae, will be co-hosted by Joe Calabrese, Charles Hirschhorn and Daniel Weiss, with tickets starting at $2,700 per person. Those who pay $33,400 will get a dinner and photo op with Kaine.

Kaine was last in L.A. on September 20 for a fundraising swing that included an event at UTA.

Hillary Clinton will also be heading back to Hollywood for big fundraiser with Elton John on October 13, her last before the election.

The solo concert with Elton John will set you back $33,400 per ticket. “Co-chairs” who give $100,000 can attend a reception with Clinton and take part in a premium dinner seating

Daughter Chelsea Clinton is also making her way west on October 20 for an event at the home of David Nevins and his wife Andrea, with actress Kristen Bell as a “special guest.”

Clinton and Kaine had their best fundraising month of the campaign in September, bringing in more than $154 million for Hillary for America and the Democratic Party.