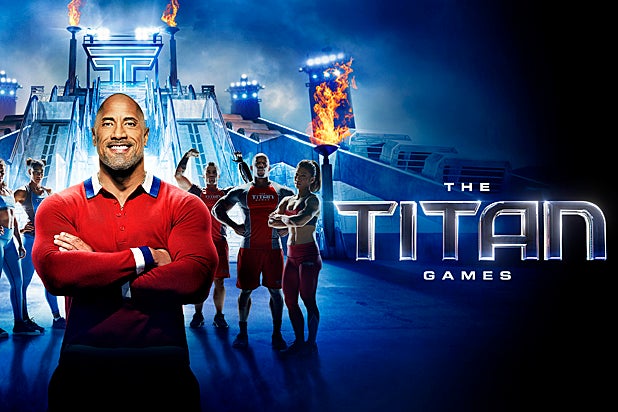 As you tuck into holiday leftovers after a month of indulging and prepare to drink in the New Year, don’t let those adrenaline-fueled promos for Dwayne Johnson’s “Titan Games” make you feel guilty.

The obstacle course challenge competition series premiering Jan. 3 on NBC is the latest creation from executive producer Arthur Smith and the team behind “American Ninja Warrior,” but the new series is very different to its 10-year-old predecessor.

If you want a taste of just how hard the obstacles are, most of them were inspired by Johnson’s own infamous workout regimen. “It’s a subject he knows a lot about,” Smith added. “He is very much the commissioner of the ‘Titans Games.'”

TheWrap: How did the collaboration with Johnson come about?
Arthur Smith: We love the sports entertainment space and our company [A. Smith & Co.] has a long history there especially as my roots are in sports, so we were asking the question of “what’s next in this space?” The big thing about creating and developing shows is that there needs to be a reason and a unique feel to it. We went through a number of notions and then landed on something we all liked, which is essentially what is now “The Titan Games.” At the same time, we were also thinking about who had the credibility to attach to it and everything screamed one person — Dwayne Johnson, who epitomizes what it is to be a Titan.

The timing was great, Dwayne was a “Ninja” watcher and he knew all about our company so it all came together.

The Rock is one of the busiest men in Hollywood, so how involved was he with the production?
Dwayne was very involved and very helpful, especially in coming up with the challenges. Part of the expertise of our company is developing these grand-scale obstacles so we created well over 100 challenges on paper. He would then tinker with them and throw in ideas, so it was a total collaboration. One of the things we wanted to make sure was that to be a Titan, you have to be a great all-around athlete. Strength is vital, but if you are just strong then you won’t win. So a lot of it was inspired by the type of workouts that Dwayne does and it’s a subject he knows a lot about.

How do the obstacles go from being brainstormed on paper into reality?
It was a crazy long, but fun process. Once we narrowed it down to a certain amount of challenges, we starting prototyping them and you just continually test, drill down and finesse it, then build the real ones and still continue to test. At the same time, you’re thinking about entertainment value. Even in the arena, we are testing on site and still tinkering all the way until they made their debut.

Aside from their brawn, how else did you choose the competitors?
What is so critical is that we say this is a platform for regular people to become heroes. These people all have real jobs — we have a guy who’s a truck driver for Budweiser who does his shift and then goes and trains for three hours, a 50-year-old grandmother firefighter in unbelievable shape, and a dental hygienist and mom-of-two. People are going to be so impressed with the level of competition and viewers can really relate to that.

Your other upcoming series, “Mental Samurai” hosted by Rob Lowe, shows off a whole different side of human strength — how does that work?
Contestants are sat in this capsule and thrown around the set and have to answer 12 questions in five minutes but can’t make a mistake or run out of time. The questions don’t seem that hard … but it is really hard to become a “Mental Samurai.” We say it’s the game that anyone can play but very few can win. What makes it interesting to watch is that we can all play along but it’s very hard to be perfect and fast while being thrown around in a capsule.

This seems very different to your other shows like “Ninja” and “Titan” — why was it so appealing to do?
It is not just about the game but why are you playing the game? There’s some really interesting stories about why people are trying to prove that they’re a “Mental Samurai.” There’s the model who is actually really smart but everyone focuses on her looks, then we have the high school drop out or other people who profess to be smart like, MENSA candidates. The thing I love the most is storytelling and this show epitomizes that.

Does your Netflix series “Death by Magic” taps into the storytelling genre too?
Yes! The show is all shot on location around the world and follows British magician Drummond Money-Coutts (a.k.a. DMC) as he attempts tricks that other magicians have died doing, going to either the birthplace of the magician or where the trick was done.

That seems rather dangerous …
We have a significant insurance policy and it was quite scary! Although a lot of these people who have died didn’t think their tricks out thoroughly.

A special two-hour premiere episode of “The Titan Games” airs on NBC Jan. 3 at 8/7c.