Fans of crime fighting orphans and black and blue tights, your ship has finally come in. On Thursday just ahead of next week’s Season 2 finale, DC Universe unveiled the super-suit that will be worn by Dick Grayson in his Nightwing persona during the third season of “Titans.” And we’ve got pics for you here.

For the uninitiated, Nightwing is the superhero alias adopted by Dick Grayson, Batman’s original Robin, after he strikes out on his own. As originally depicted in a 1984 storyline by writer Marv Wolfman and artist George Pérez, after six years as Robin, 19-year-0ld Dick has a falling out with Batman and is essentially fired. After some soul searching, he adopts the name Nightwing and continues to lead the Teen Titans (the group from which “Titans” takes its name) through some harrowing times.

Following the 1985 crossover “Crisis on Infinite Earths” the character’s origin story was tweaked slightly (he was dismissed after being shot by the Joker), but he continues to lead the Teen Titans while occasionally popping up to help Batman in Gotham City. Eventually Grayson moves to the nearby city of Bludhaven, where in his civilian identity he joins the police department in order to battle corruption, and as Nightwing serves as the city’s official superheroic protector.

The Season 2 finale of “Titans” airs Nov. 29, which means we’ll still have to wait a year to see how Brenton Thwaites, who plays Dick Grayson on “Titans,” will actually look in the costume. But you can see it on a super-buff mannequin in the photos below.

First up, a side by side comparison of the show’s costume — which was designed by Laura Jean Shannon, and built by Creative Character Engineering — and how it currently looks in the comics. 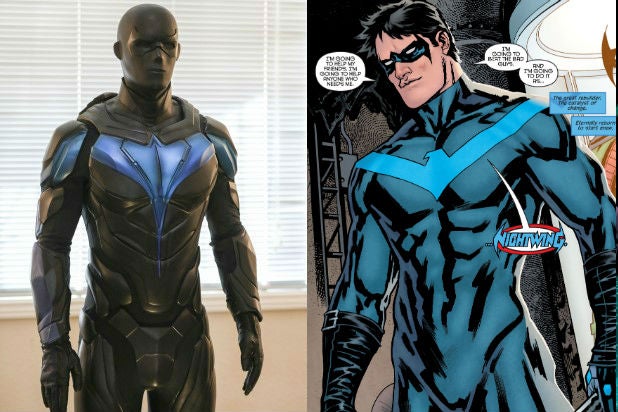 Like a lot of comics-to-live action transitions, the “Titans” version is more like armor than high tech spandex, but Shannon and her team have preserved the essence of the comics version in some cool ways. I particularly like how the blue bird emblem still extends to the shoulders (see a closer look at the top of the page) — and of course who doesn’t love a good domino mask.

Next, here’s a fuller look at the TV show’s version of the suit: 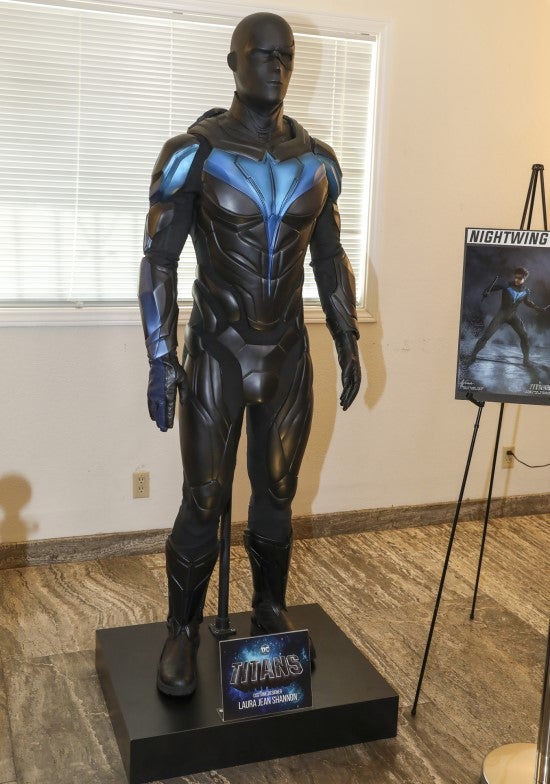 Of course, while the “Titans” version tracks pretty closely to how the outfit currently looks in the comics, it shouldn’t come as a surprise to find out that Nightwing’s costume has changed a lot in the 35 years since the superhero persona was introduced. And we mean, a lot. Allow me to introduce you to the very first version, from “Tales of the Teen Titans” issue 44:

To be honest, I kind of have to insist that “Titans” put Dick Grayson in this magical example of 1980s pizzazz at some point, because it truly is, objectively, the best. Laura Jean Shannon, if you’re reading this, consider this a pathetic beg.