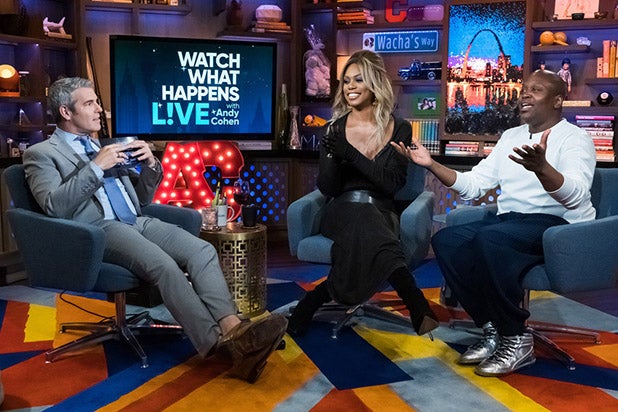 Tituss Burgess called out “Watch What Happens Live” host Andy Cohen on Monday after taking issue with at least one topic of discussion from Sunday’s episode of the Bravo talk show.

“She can be a messy queen!” the “Unbreakable Kimmy Schmidt” star wrote in an Instagram post after appearing on the show alongside Laverne Cox. “Yes I said it! Don’t care he knows either! He should remember his talk show isn’t an episode of the real housewives of Atlanta!”

The post seemed to reference a somewhat tense exchange on the show about the actor’s upcoming project with Eddie Murphy, the film “Dolemite Is My Name.” Burgess appeared to bristle in response to a question about his working relationship with the comedian given Murphy’s history of using gay slurs in his comedy.

“He was very problematic for the gays at one point when I was coming up,” Cohen noted during the interview portion of the show, to which Burgess responded that he had a “wonderful time” working with Murphy and “any troubles he may have had with gay people I guess are gone because he loved me.”

Following the question, Burgess gave Cohen a prolonged look. Watch the interaction below:

Cohen has previously recalled — including in his 2012 memoir “Most Talkative” — the time he attended one of Murphy’s stand-up shows in high school and fled to the bathroom because he was so upset by the comedian’s frequent use of gay slurs. Murphy has since apologized for that portion of his act.

Burgess went on to accuse Cohen of “ratchet behavior” and demonstrating “blatant disregard for one of his guests.”

A spokesperson for Bravo did not return TheWrap’s request for comment.

Surprise! This was all for you Momma. Start to finish it’s been an amazing weekend in DC with my closest friends and family, and of course the most incredible audience at the Kennedy Center. Tons of laughs, love, and amazing memories. #Grateful