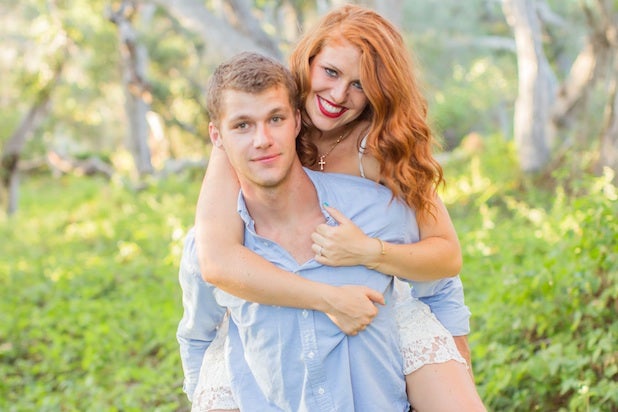 TLC’s cameras set their focus on Jeremy Roloff’s wedding in Hillsboro, Ore. on Saturday afternoon, which will serve as the current season’s finale event airing on Tuesday, Sept. 30.

Jeremy, 24, said “I do” to marrying girlfriend Audrey Botti, 23, in a ceremony held at his family’s home and business, Roloff Farms, a network representative told TheWrap.

The couple wrote and recited their own vows. The groom’s twin brother Zach Roloff served as his best man. Audrey’s sister Margot Botti was maid of honor. Jeremy’s sister, Molly, served as a bridesmaid.

In keeping with Jeremy’s easy demeanor, he opted to wear a suit designed by San Francisco-based Proper Suit, which was tailored by Maxamillion.

Audrey’s dress was designed by Lauren Graebner under her label Eva’s by Reclamation. She also wore a floral crown designed by Vanessa Schmidt. The bridesmaids wore simpler, smaller crowns, as well.

The couple’s vintage theme for the wedding touched every element of its design, from the invitation bearing typewriter font (pictured below), which reflected the couple’s longstanding tradition of writing typewritten letters to each other during their long distance relationship, to the decorations, including lots of florals, which included blush roses, white roses, lavender and baby’s breath. The site was accented with blue and brown.

Jeremy and Audrey were engaged last March at Roloff Farms.

Later that same month, Zach, Matt and Amy’s only child with dwarfism, also got engaged to girlfriend Tori Patton, 23. Patton has become familiar to the show’s fans through appearances over the last couple years as an employee of Roloff Farms and friend to sister Molly. TLC plans to film Zach and Tori’s wedding for a future season or special.

These Roloff weddings should serve as a bright spot for the show’s fans after parents Matt and Amy announced their separation, which was the focus of the “Little People, Big World” special that aired in March.

US Magazine had the first photo from Jeremy’s wedding below: