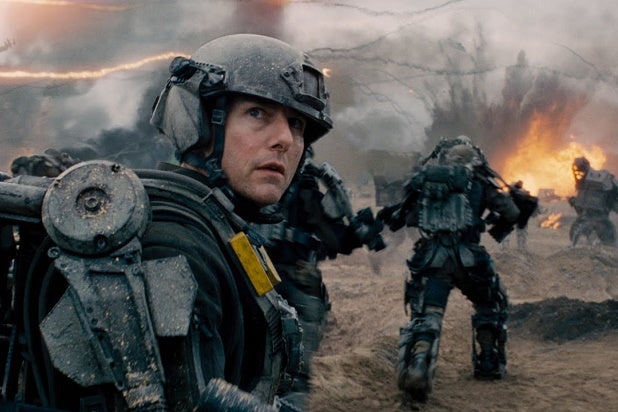 The Tom Cruise sci-fi movie “Edge of Tomorrow” has a lot of ground to make up if it’s going to avoid being summer’s first big-budget box-office dud.

The futuristic Warner Bros. action film is looking at a June 6 weekend debut in the $25 million-$30 million range, according to pre-release tracking that came online Thursday morning. Emily Blunt co-stars in the film, which is directed by Doug Liman.

Tracking, particularly early, is intended to be a marketing tool rather a gauge of box-office potential and there is still time for the studio to build momentum. But “Edge of Tomorrow” at this point isn’t packing the domestic punch of “Oblivion,” another Cruise sci-fi film that opened to $37 million last April.

That means “Edge of Tomorrow” will have to do a lot of business overseas if it hopes to make up its $175 million production budget and marketing costs. The studio has from the outset focused on foreign with this film, and Cruise remains a major force at the international box office. “Oblivion” brought in nearly 70 percent of its $286 million worldwide haul from abroad.

Compounding the problem for “Edge of Tomorrow” is that it’s opening against Fox’s “The Fault in Our Stars.” The romantic drama starring Shailene Woodley also came on tracking Thursday — in the $25 million range as well.

The adaptation of John Green‘s bestselling young-adult novel about young cancer patients finding love only stands to gain ground, because it has been a monster on social media — outstripping many of the summer’s biggest movies — so it’s very likely to go higher.

Fox marketers have mobilized the book’s rabid young-female readers with an aggressive multi-city screening campaign, and “Fault” fanatics are making big noise on social media. For the past week, Twitter mentions of “Fault” have outstripped those of “Godzilla,” Fox’s blockbuster-to-be “X-Men: Days of Future Past,” “Neighbors” and Disney’s “Maleficent.” The first trailer from the film has been viewed 17 million times and “liked” on YouTube more than any film in history.

With a production budget of $12 million, “Fault In Our Stars” looks very much like a winner for Fox.