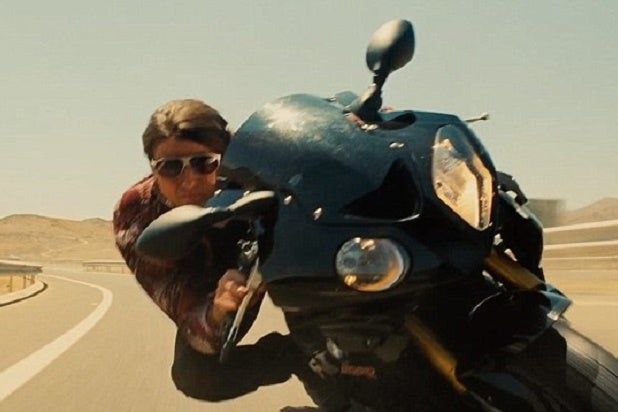 What happens if a supposedly “review-proof” summer action film gets good reviews?

Paramount is about to find out with “Mission: Impossible – Rogue Nation,” the fifth installment in Tom Cruise’s spy-caper series, which opens Friday in more than 3,800 theaters across North America with some of the strongest raves of the season.

Critics have the $150 million action film at a glossy 91 percent positive on Rotten Tomatoes and 77 percent on tougher-grading MetaCritic.

But good reviews may only go so far to boost box office for a summer action film. Just look at Cruise’s “Edge of Tomorrow” last year. “Audience’s word of mouth is what really matters,” said Exhibitor Relations senior analyst Jeff Bock, “and reviews can affect that.”

But distributor Paramount Pictures and tracking numbers suggest an opening of around $40 million, which would be the third-lowest No. 1 opening of summer, ahead of only “Spy” and “Tomorrowland.”

The weekend’s other wide opener is “Vacation,” an R-rated remake of the 1983 Chevy Chase comedy, which opened Wednesday and is looking at around $35 million over the five days for Warner Bros.

The road warriors of director George Miller’s similarly well-reviewed action epic opened to $45 million and ran second to a bunch of girls — “Pitch Perfect 2” — back in May. But “Max” held on to gross $150 million domestically and is heading for $400 million worldwide for Warner Bros.

If “Rogue Nation” builds word of mouth, Bock said, “it could play all through August and maybe September.”

The film’s other vital signs are strong. On Twitter and Facebook, it’s ahead of “Dawn of the Planet of the Apes,” a sci-fi action film with strong reviews that Fox opened to $79 million around this time last year. It got a big boost from two trailers, the first in March and the second arriving in June, that showcased the film’s spectacular stunt work and action scenes.

That Brad Bird-directed thriller made $700 million worldwide and resuscitated Cruise’s career after it had been sidetracked by his Scientology association, a wild rant on Oprah Winfrey’s TV show and a falling out with Sumner Redstone, the former Paramount boss who now heads its parent company, Viacom.

In celebration of the outrageous action sequences in “Furious 7,” we toast these far-fetched but highly rewarding action scenes.

These wild scenarios have actors squaring off at the box office, sequels competing with predecessors and audiences dumbstruck.