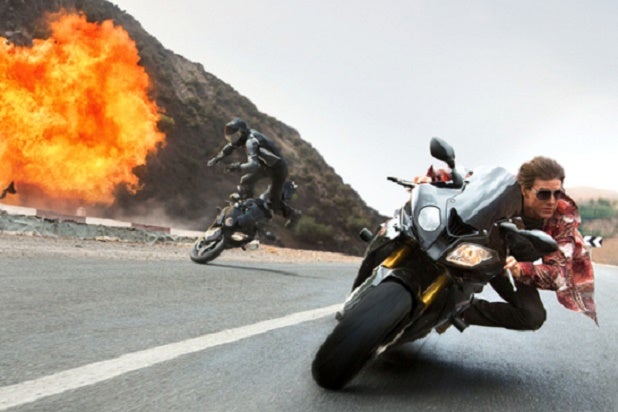 “Mission: Impossible – Rogue Nation” roared out of the gate with an estimated $20.3 million Friday, blowing away two-time defending champ “Ant-Man,” the raunchy “Vacation” sequel and analysts’ projections on its way to an opening weekend north of $50 million at the box office.

The fifth film in Paramount Pictures’ 19-year-old action franchise is on pace for its biggest opening since “Mission Impossible II” debuted with $57 million in 2000, and will be the best for Cruise since 2005’s “War of the Worlds” rolled out with $65 million in 2005.

It’s well ahead of the expectations of Paramount, and reestablishes Cruise’s action-star credentials after three of his recent films — “Edge of Tomorrow,” “Jack Reacher” and “Oblivion” — were more solid than spectacular at the box office.

The pyrotechnics and over-the-top stunts of the action extravaganza play well on giant screens, and IMAX theaters delivered roughly 16 percent of Friday’s grosses. In February, Paramount shifted the film’s release date from Christmas Day to summer, in part to take advantage of IMAX theaters, most of which will go to “Star Wars: The Force Awakens” over the holiday.

“Rogue Nation” brought in $24.6 million from overseas on Friday, and Paramount was projecting $60 million from abroad this weekend, so it’s looking like a win for the studio and David Ellison’s Skydance Productions, which produced the $150 million action film with J.J. Abrams, Donald Burk and Don Granger.

Warner Bros.’ “Vacation,” the weekend’s other wide opener and an R-rated sequel to the 1983 comedy hit, was a distant second Friday with $4.4 million and heading for roughly $14 million for the three-day weekend.

That puts the $31 million comedy on course for an underwhelming $20 million over the five days since its Wednesday opening, well under the $30 million the studio had hoped for.

“Vacation,” starring Ed Helms and Christina Applegate, received a “B” CinemaScore, in line with the lukewarm response of critics who have it at 27 percent on Rotten Tomatoes.

Disney’s Marvel superhero saga “Ant-Man” was third with $3.7 million Friday and heading for $13 million over the three days, pushing the domestic total past $130 million and its worldwide haul to nearly $250 million after three weeks.

Universal/Illumination Entertainment’s “Minions” was on the way to a $12 million fourth week after the animated hit put up $3.6 million Friday. “Minions” is bearing down on $300 million domestically and crossed the $500 million mark overseas last week.

“Pixels,” the PG-13 video game comedy starring Adam Sandler from Sony, was heading for fifth place and roughly $10 million in its second week, after taking in $3.5 million on Friday.

Despite the breakout by “M:I-5,” the overall box office was running roughly 25 percent under the comparable frame last year, when Marvel’s “Guardians of the Galaxy” debuted with $94 million for Disney.