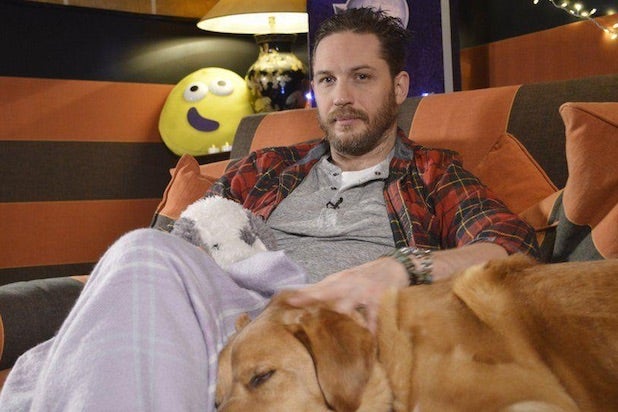 Young moms out there, if Tom Hardy already gets you all hot and bothered, you really must watch the video clip below.

The hunky star of “The Revenant” and FX’s upcoming “Taboo” spent his New Year’s lounging on his sofa… reading a children’s book to his tinier fans.

Surrounded by stuffed toys and his loyal dog Woody (insert dirty joke here), Hardy read “You Must Bring a Hat” by Simon Philip and Kate Hindley.

When word spread that the British bad boy of films was going to appear on BBC’s “CBeebies Bedtime Stories” reading for wee ones, mothers across the UK went into a social media meltdown. The good kind, of course. Both the announcement of his appearance and the airing itself triggered hearts to flutter.

While one mother wrote on Facebook, “Can he read Fifty Shades of Grey?” others took to Twitter with their approval of BBC’s choice of storytellers.

My girls are spending NYE with their dad so on my own but I've still watched CBeebies BedTime story though, because.. Tom Hardy ???? #joinin

I STAYED IN ON NEW YEARS EVE FOR THIS MOMENT. TOM HARDY TELLING A STORY ON CBEEBIES. BAHAHAHA pic.twitter.com/Wa4dislh4n

Not even the New Year fireworks can top that, my night is complete! Thanks Tom Hardy for the bedtime hour #cbeebies #metime

Just watched Tom Hardy on CBeebies Bedtime Stories and would just like to say, what utter brilliance.