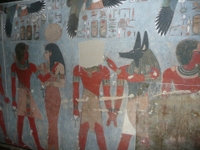 This is a rare photograph, taken inside the tomb of Amenophis III in Luxor’s Valley of the Kings this week. The tomb is not excavated and as such is closed to the public; and photos are not permitted in any tombs at all. (Also, the tomb is pitch black, so I am amazed it came out this clearly.) But the director of the site, Mostafa Wazery, opened it and allowed me to take pictures to illustrate the mutilations that have happened in the past two centuries by European adventurers. The cut-out is one of five heads of the pharaoh that were taken some time after the tomb was identified in 1829, a particular sacrilege because this tomb is otherwise in exquisite condition, with bright colors and beautifully preserved scenes of the pharaoh as he goes to the afterlife. (Click on the photo to see it more fully.) This tomb is a stunning 3,400 years old. The Louvre, apparently, has the five cut-outs of Amenophis. Zahi Hawass has asked for them back. The tomb will eventually be excavated and opened, and he feels they should be restored. This is one case where I would have to agree. This second photo is from the facing wall. 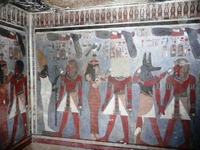