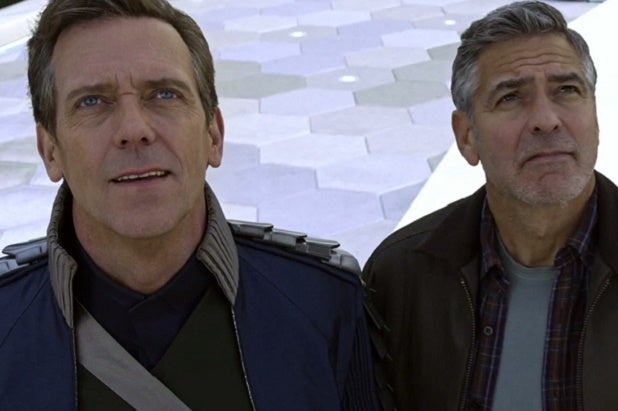 Director Brad Bird and Damon Lindelof‘s “Tomorrowland” launched with $9.7 million at the box office Friday, but couldn’t pull away from last week’s No. 1 movie “Pitch Perfect 2,” setting the stage for a tight race over the Memorial Day weekend.

Both Disney’s sci-fi adventure starring George Clooney, Britt Robertson and Hugh Laurie and Universal’s musical comedy sequel are heading for around $40 million over the four days. Anna Kendrick, Rebel Wilson and the rest of the Barden Bellas took in $9.6 million, and will cross the $100 million mark domestically on Saturday.

“Tomorrowland” is rated PG and “Pitch Perfect 2” is PG-13, so they’ll be battling for the same family crowd. Disney’s brand typically provides an edge with that group, but it’s hard to bet against “Pitch Perfect” after its stunning $69 million debut last weekend, which was an eye-popping $30 million over projections and gave Elizabeth Banks’ the best feature directing debut ever.

Another second-week movie, “Mad Max: Fury Road,” was fourth Friday with $6.7 million. The Tom Hardy-Charlize Theron action epic, the only R-rated film in the top ten, is expected to pick up steam and finish with a little less than $30 million over the four days for Warner Bros.

That’s where MGM and Fox’s PG-13-rated horror remake “Poltergeist,” the only other wide opening film, is heading as well, after debuting just behind the leaders with $9.3 million Friday.

That would be a little better than expected for the Gil Kenan-directed remake starring Sam Rockwell and Rosemarie DeWitt. And for what it’s worth, considerably better than the $17 million that the 33-year-old original film’s $7 million three-day total translates to when adjusted for inflation.

The original, directed by Tobe Hooper and co-written and produced by Steven Spielberg, went on to make $76 million, or $190 million in today’s inflation-adjusted dollars, and spawn two sequels. MGM and Fox would take that in a minute, since the production budget for the remake is a moderate $35 million.

The profitability bar is higher for “Tomorrowland,” which comes in with $150 million production budget. Bird and Lindelof co-wrote “Tomorrowland” with Jeff Jensen, and co-produced with Jeffrey Chernov. Their original adventure was inspired by iconic Disney founder Walt Disney and one of Disneyland’s rides. It might have had a higher Friday total, but the studio gave up some Thursday night grosses by limiting it to 700 “movie palaces.”

“Tomorrowland” received a “B” CinemaScore from audiences, while “Poltergeist” drew a “C ” from typically tough-grading horror fans.

“Avengers: Age of Ultron” took in $5.3 million Friday and the Marvel superhero blockbuster is on course for around $28 million over the long weekend, so it is within striking distance of the two films ahead of it. The Joss Whedon-directed “Ultron” is the year’s top-grossing film domestically and is expected to pass the $400 million mark this weekend, adding to its $1.15 billion global haul for Disney.

“Far From the Madding Crowd,” another remake of older film — the original with Julie Christie and Alan Bates came out in 1967 — went from 576 to 865 theaters and brought in $606,000 in its fourth week for Fox Searchlight. That puts the Tom Vinterberg-directed drama starring Carey Mulligan and Matthias Schoenaerts on course for $2.3 million over the four days and seventh place.

The Reese Witherspoon-Sofia Vergara comedy “Hot Pursuit” is on its way to a $3.2 million sixth-place finish in its third week for Warner Bros., which would lift its domestic total past $29 million.

DreamWorks Animation’s “Home,” Universal’s “Furious 7” and Sony’s “Paul Blart: Mall Cop 2” rounded out the top ten and all will wind up at around $2 million over the long weekend. “Home” is bearing down on $170 million domestically in its ninth week, “Furious 7” is near $350 million domestically (and $1.5 billion globally) in its eighth and “Blart 2” is near $65 million in its sixth week.

For all the excitement provided by the bunched pack of leaders, the holiday is on pace to run roughly 17 percent behind last year’s Memorial Day weekend, when Fox’s “X-Men: Days of Future Past” led the way with $110 million over the four days.