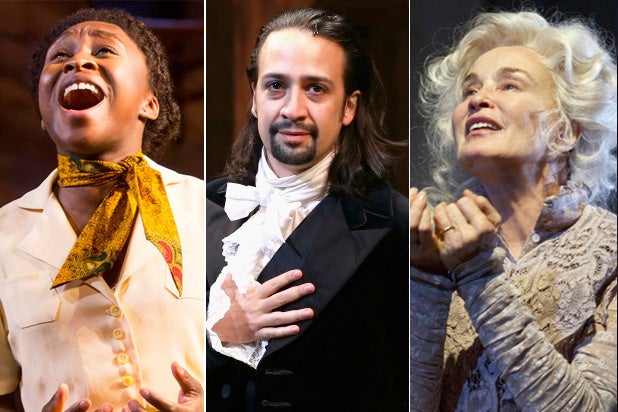 CBS’ Tony Awards hauled in 8.73 million total viewers, up 35 percent from last year. The growth was even more dramatic in the key 18-49 demographic rating, with the James Corden-hosted show’s 1.6 marking a 60 percent rise from 2015.

Across all of primetime — which on Sundays includes the 7 o’clock hour — CBS topped total viewers, though NBC was able to edge the so-called Tiffany Network in the main demo.

Read the earlier overnight numbers for the Tony Awards here.

NBC was first in ratings with a 1.5 rating/5 share in the advertiser-coveted 18-49 demographic and second in total viewers with an average of 5 million, according to preliminary numbers. At 7 p.m., the finale of “Dateline: On Assignment” had a 1.2/5 and 5.6 million viewers.

The Pittsburgh Penguins closed the Stanley Cup out starting at 8, with  averaging a 1.5/5 and 4.8 million viewers. The contest should increase a few tenths when final numbers are in.

ABC was third in ratings with a 1.1/4 and in viewers with 4.8 million. Following reruns, 10 o’clock coverage of the Orlando attack received a 1.2/4 and 5.2 million viewers.

Univision was fourth in ratings with a 0.9/3 and in viewers with 2.1 million.

Telemundo and Fox tied for fifth in ratings, both with a 0.5/2. Telemundo was fifth in total viewers with 1.4 million; Fox was sixth in 1.2 million, airing repeats.