James Corden's opening number  Tony-winning host James Corden started the show on the couch -- which happened to be located center stage at Radio City Music Hall. And he followed with a live musical extravaganza, featuring the casts of just about every nominated show and playful teasing of television in favor of live theater.

Bob Mackie wins his first Tony  The three-time Oscar nominee picked up his first Tony Award for designing the bedazzled costumes for "The Cher Show," a bio-musical about his longtime friend. "This is very encouraging for an 80-year-old," he joked on stage.

Jez Butterworth goes off script  The playwright ditched the prepared description of his Best Play nominee, "The Ferryman," to give a shout-out to his wife, nominee Laura Donnelly, who gave birth to their two children during the run of the show in London and New York (and whose family history inspired the Irish-set drama).

André De Shields kicks off the "Hadestown" sweep  The 73-year-old Broadway veteran kicked off a big night for "Hadestown" with a win for Best Featured Actor in a Musical. "Slowly is the fastest way to get to somewhere you want to be," he advised in his speech. (The musical retelling of the myth of Orpheus and Eurydice went on to win eight awards, including Best Musical.)

Taylor Mac makes an entrance  "Hello, queens! I wrote a play," Mac said before introducing his own Best Play nominee "Gary: A Sequel to Titus Andronicus."

"Beetlejuice" mixes it up with Tony-centric lyrics  Not content to perform the opening number as written, Best Actor nominee Alex Brightman instead performed Tony-specific lyrics like "I want money, I want art, I want Glenda Jackson's part" and calling out a fellow nominee: "Hey, Adam Driver, you killed Han Solo -- not cool, bro."

Rachel Chavkin says it's #TimesUp for Broadway  Accepting the Tony for directing "Hadestown," Rachel Chavkin called on Broadway to do better about employing women and artists of color. “There are so many women who are ready to go. There are so many artists of color who are ready to go. And we need to see that racial diversity and gender diversity reflected in our critical establishment, too,” she said in her speech. “This is not a pipeline issue. It is a failure of imagination by a field whose job is to imagine the way the world could be.”

"Oklahoma!" star Ali Stroker wheels into history  Just minutes after performing her flirty song "I Cain't Say No" from "Oklahoma!" "Glee" alum Ali Stroker became the first actor in a wheelchair to win a Tony. “This award is for every kid who has a disability, a limitation or a challenge who has been waiting to see themselves represented in this arena,” she said. 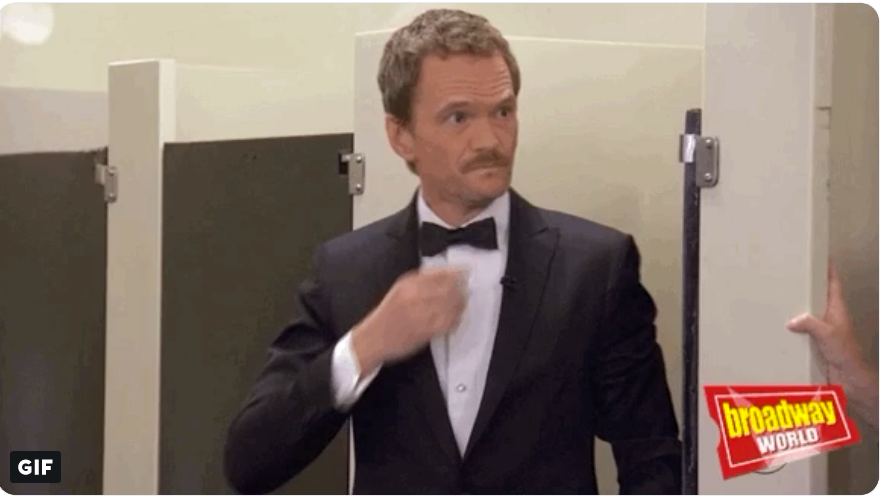 Neil Patrick Harris makes a surprise cameo  Though the new hit musical "Be More Chill" got snubbed in the nominations, James Corden returned to perform a parody of the show's anxiety-laden tune "Michael in the Bathroom," joined by last year's hosts, Sara Bareilles and Josh Groban -- and a surprise coda with a mustachioed and not-at-all-insecure Neil Patrick Harris.

The Audra McDonald vs. Laura Linney smackdown  In an attempt to goose ratings, James Corden invited stage stars to air beefs -- and these two actresses obliged with a backstage feud that I'd pay good money to see. (Bonus: Audra McDonald took off her earrings as she charged at Linney for supposedly flipping her off.)

Jeff Daniels snubbed  Just hours after delivering a comic bit during Corden's opening monologue in which he scowled on learning he lost the Tony, the heavily favored "To Kill a Mockingbird" star had a more stoic reaction when "Network" star Cranston surprised in his category.
x
Looks like you're enjoying reading