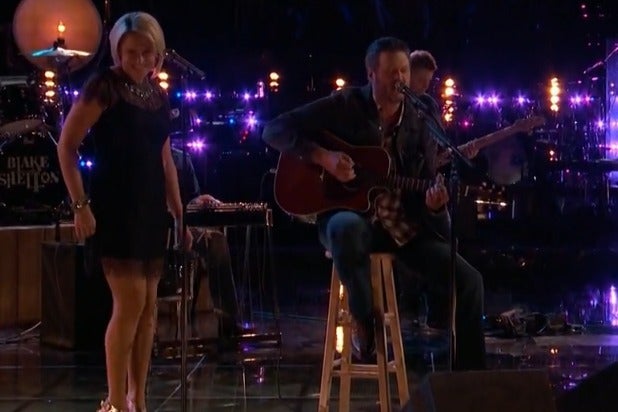 We’re down to the Top 8 on NBC’s “The Voice,” which means they spent a lot of time focusing on the top 8 Adam Levine‘s new hair color (priorities, you guys!). Now let’s pour a glass of wine and talk my highlights from this week’s performances.

1. Coach Wardrobe
Shakira is dressed for an ice-skating competition. Usher is wearing black (again). Blake Shelton is going to a wedding in someone’s backyard. Most importantly, Adam Levine is wearing what appears to be a yellow sweater on his head.

2. Season 2 represent!
It was a sweet surprise to see fellow season 2 alumni Gwen Sebastian act as Blake’s mentor this week. Not only did she look amazing, but she also sounded amazing on Blake’s “My Eyes.” More Gwen please!

3. The school of Sisaundra Lewis
I’m a little worried about Team Blake’s Sisaundra Lewis this week. She sang masterfully (as always), but “River Deep, Mountain High” seemed too frenetic a choice for her to really spread her wings and fly (until the last few notes). Also, she opened the show, and we all know that’s the least advantageous spot in terms of audience numbers. That being said, Sisaundra schooled everyone on how to gracefully cover Tina Turner, and I hope to God she stays another week.

4. Favorite Performance
My very favorite performance this week came via Team Usher’s Josh Kaufman. His “I Can’t Make You Love Me” was gorgeous, fluid, emotive and truly pitch perfect. It gave me ugly goose bumps and even made my viewing partner note, “I almost cried!” Word, I “almost cried” too, and I “almost” burned through a few tissues. Whatever, you guys. Don’t judge me.

5. What season are YOU on, Blake?
Blake called Josh’s performance as perfect as any he had seen in seven seasons of “The Voice.” Now either Blake stepped into a time machine and checked out the next season or he was confused about where/when he was this week (season 6)…give the poor man a vacation, producers!

6. Great branding
Ah, “framily.” This terrible merger of the words friends and family comes courtesy of Sprint and sounds a lot like a painful infection that requires antibiotics.

7. Most unexpected arrangement
Kat Perkins’s “Get Lucky” was odd in theory – as Adam said, it was “a heavy metal rendition of a Daft Punk funk tune.” It shouldn’t have worked, but it did. It honestly felt like the Team Adam rocker did a more inventive re-arrangement of a song than the hip-hop to ballad flipping Christina Grimmie is becoming so well known for. I loved it.

8. All the human emotions
Kristen Merlin gave us all the human emotions this week. While I didn’t love “I Drive Your Truck” for the last standing member of Team Shakira, Kristen’s sincerity can’t be denied. Would I love to see her do less sentimental country music and show more of that spunk we saw in her blind audition? Yes. Am I still rooting for her? Definitely.

9. The best sweater to grace “The Voice” stage
I don’t give this award out lightly, y’all. Best sweater EVER goes to Pharrell for his Mickey Mouse themed pullover worn during “Come Get It Bae.” It was a perfectly good performance, but that sweater upstaged both the song and the now infamous Arby’s hat.

10. Just say no to R. Kelly
There are so many reasons to say no to R. Kelly (most of which I won’t go into, because this isn’t TMZ), but “I Believe I Can Fly” is his biggest transgression. It’s quite possibly one of the most treacly, ridiculously overwrought songs to grace Pop radio. The wonderful Delvin Choice (Team Adam) inexplicably felt connected to the song, but I’m concerned this tepid musical choice may have put out the fire he started last week.

11. Hollaback Woman
While I’m a bit bummed that Gwen Stefani didn’t have any new material to perform this week, it was still fun to see her take the stage again with Pharrell (and the sweater!) in tow. Note: I think it’s safe to say that ten years later, Gwen is no longer a “Hollaback Girl” – she’s a “Hollaback Woman.”

12. Unstopppable
Audra McLaughlin’s “Forgive” didn’t soar as much as last week’s “You Lie”, but the Team Blake member had enough lovely moments (including a stunning last note) to help us “forgive” the less stellar aspects of her performance. Shakira called her “unstoppable.” I call her the best country singer left on this show.

13. Gettin’ redneck
With staging setup to look like a ho-down, Team Blake’s Jake Worthington seemed right at home with the aggressively fun “Hillbilly Deluxe.” Despite struggling with allergies, Jake really worked the stage, squeezing as much charisma out of the song as he could. While I know this is “The Voice” and not “The Personality,” I am still selfishly hoping for more Jake on my TV screen, and if that means the Top 5 — so be it.

14. The hip hop comfort zone
Team Adam’s Christina Grimmie functions well in the realm of hip hop to ballad conversions, flipping popular rap songs on their head like a dynamo (as demonstrated with last week’s “Hold On, We’re Going Home”). While her “How to Love” didn’t feel as exciting or original as last week’s arrangement, it was still a great showing for the Youtube star. Her fiery performance allowed her another opportunity to showcase her insane range and pre-natural confidence while further cementing her as the artist to beat going into the Semi-Finals.

Who are your picks for the Top 5? Did Adam dye his hair to become a new character on “Portlandia,” or was this just a thing? Leave your thoughts in the comments!

Don’t forget to check out my album “In & Out of the Dark,” available on iTunes NOW:  https://itun.es/us/2BjbP. For more updates, follow me on Twitter: @katrinapmusic and visit my website, www.katrinaparker.com.