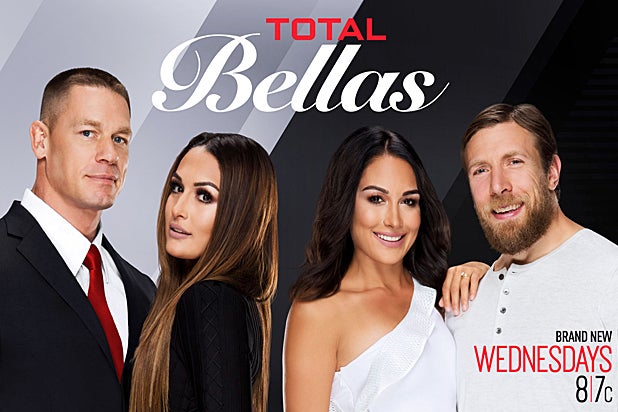 “Total Bellas” has been picked up for a second season at E!, the network announced on Wednesday.

In the spinoff of the network’s hit series “Total Divas,” the second season will be eight one-hour episodes and will give viewers exclusive access to WWE Superstars Nikki Bella and John Cena as they temporarily relocate to Phoenix, Arizona, to help Brie Bella and Daniel Bryan through their first pregnancy.

“We are excited to build on the success of the first season of ‘Total Bellas’ by inviting viewers back for a second round of family fun with the Bellas and their fellas,” said Jeff Olde, EVP of programming and development at E! “Nikki, Brie, John and Daniel all exude copious amounts of wit, talent and strength, but it’s their openness to be completely real that has resonated with viewers and we are delighted to share an intimate look at two of WWE’s most prominent couples.”

In Season 1, Brie and Daniel moved to Tampa, Florida, to help Nikki and John during a time of need and now the time has come to return the favor. With the Bellas’ careers outside the ring expanding rapidly each day, Brie’s baby bump growing by the minute and Daniel constantly traveling under his new role as General Manager of WWE’s SmackDown Live, the soon-to-be first-time parents are in need of some serious help around the house and in the office.

Tonight the Bella Twins will be returning to “Total Divas” for the Season 6 premiere. In addition to The Bellas, the new season will follow fan favorites Eva Marie, Naomi, Natalya and Paige as they balance the action of their professional careers and the drama of their everyday lives. In addition, season six will introduce fans to WWE Superstars Lana and Maryse and announcer Renee Young.